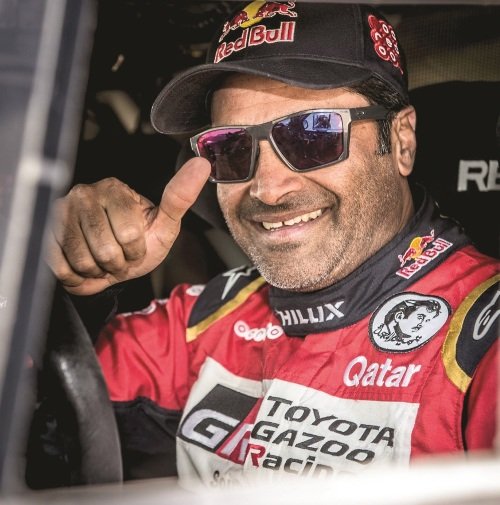 The Qatari, who is running under the Toyota Gazoo Racing South Africa banner, began the day with a lead of 40min 33sec over China’s Lui Kun and a stage time of 4hrs 21min 26sec through many difficult sandy sections in the Gobi Desert enabled the Toyota Hilux driver to increase that advantage heading into the last two days.

Dutchman Erik van Loon and Frenchman Sebastien Delaunay have recovered well from second stage delays and the second Overdrive Racing crew began the eighth day in 23rd overall. They were second fastest on the day’s stage. 4min 35sec behind Al Attiyah, and continued their steady climb back through the field.

The Dutchman was running as the fastest of all the drivers through the 58km checkpoint in the day’s stage before slipping behind Chinese pace-setter Lui Kun after 120km.

Al Attiyah was the first driver to pass the next checkpoint after 165km in 2hrs 04min 21sec.

The Qatari was 45 seconds faster than Matthieu Serradori with Van Loon in third place and Ming Zhang in fourth. Nasser continued to lead through the subsequent checkpoints to claim a seventh successive stage win, but Kun Lui dropped serious time midway through the special and ceded his second place overall – a position that was taken by Frenchman Jérôme Pelichet.

Al Attiyah had claimed a sixth successive stage win on the 408.15km section between Mandalgovi and Dalanzadgad in Mongolia on Friday.

The Qatari looked to be in a vulnerable position after the crew made a rare navigational mistake, but all the Toyota’s leading rivals followed suit and made a similar error and that enabled the Qatari to snatch the stage win by 3min 15sec from Overdrive Racing team-mate Van Loon.

The Qatari said: “Sometimes navigation is not easy and the sixth stage was one of those days. We were never lost, we just had to go back a few hundred metres to find the right way.”

There was no special stage on the seventh day on Saturday. Two liaison sections of 370.37km and 180.29km took crews to the border between Dalanzadgad in Mongolia and the China frontier and on to the night halt at Bayinbaolige in China’s Inner Mongolia.

Today, teams tackle the ninth and penultimate stage of the Silk Way Rally between Alashan and Jiayuguan.

Jiayuguan is a prefecture-level city in north-western Gansu Province and is most famous for the nearby Jiavu Pass, the largest and most intact of its kind on the Great Wall of China.