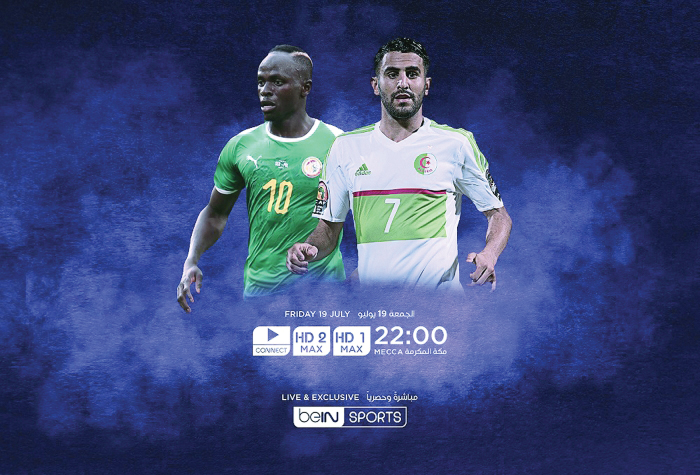 Doha, 18 July 2019 - The final of the hugely successful Total Africa Cup of Nations Egypt 2019 gets underway as Algeria take on Senegal live and exclusive on beIN SPORTS.
More than 600 million viewers have followed the tournament live and exclusive on beIN SPORTS – and with the final yet to be played, even more viewers are set to tune in to watch one of the most exciting AFCON tournaments to date.
The Algerians, led by their talisman Riyad Mahrez, defeated a strong Nigerian team on Sunday to book a place in the final. The Manchester City star scored a remarkable free kick in the 95th minute of the match to seal the win and help his team qualify to the final for the 3rd time in Algerian football history.
Senegal, on the other hand, defeated a resilient Tunisian side to book a place in their 2nd ever AFCON final. Football fans will be excited to see both Riyad Mahrez and Sadio Mane go head to head for a chance to lift the AFCON trophy. Both players have also competed for the English Premier League trophy.
beIN’s coverage for the Total Africa Cup of Nations Egypt 2019 final will span throughout the day with 12 special documentaries dedicated to the final – produced exclusively by beIN. beIN SPORTS HD MAX 1, MAX 2 and the news channel will also show a total of 75 hours of programs dedicated to the final.
The final between Algeria and Senegal will be available in 3 languages – Arabic, English and French as well as on site commentary and reporters. beIN will also show live reactions from different parts of the world, including Algeria, Qatar, France, UK and Morocco.
The final will take place at 22:00 Mecca time on July 19 at the Cairo International Stadium in Egypt live on beIN SPORTS HD MAX 1, 2 and 4K with presenter Lakhdar Berriche and beIN stars Tarek Dhiab, Rafik Saifi, Yusuf Chippo and Egyptian legend Mohamed Abutrika.