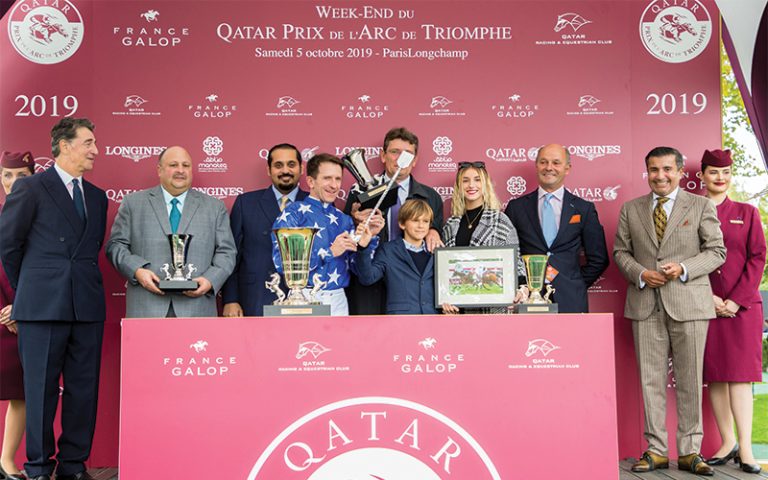 The black type 2,000-metre race carrying a purse of €150,000 was hotly contested, with a closely fought finish between the François Rohaut-trained and François-Xavier Bertras-ridden RAAHAH, who won by a neck. The Mrs Elizabeth Bernard-trained and Jean-Bernard Eyquem-ridden JAAZMAH ATHBAH finished in second and the Royal Cavalry of Oman-owned and Charles Gourdain-trained VIVABAINA was a further neck behind in third under Olivier Peslier.

Drawn wide, RAAHAH raced on the outside of the field with no cover. Jockey FX Bertras began asking her to accelerate in the final turn and the bay mare showed great bravery to battle the whole way down the straight, holding off a strong challenge from JAAZMAH ATHBAH.

“She was very unlucky last time out, not any fault of hers but due to another runner”, commented winning jockey FX Bertras, “She has improved enormously lately and came into this race in top form. You need a tough runner to win today. JAAZMAH ATHBAH put us under pressure in the final 50 meters, but RAAHAH is stubborn and never gives up!”

RAAHAH was supplemented into the race – a judicious decision by her owner and her trainer, François Rohaut. She came here off a career best when placed third in the Prix Nevadour (Gr3-PA) at Toulouse in August.

The 2019 Qatar Prix de l’Arc de Triomphe weekend opened with the Gr2 Prix Dollar, which boasts a value of €200,000. It was won by the starting favourite, SKALLETI (KENDARGENT), who runs in the colours of Jean-Claude Seroul and is trained by Jérome Reynier in Marseille. SKALLETI was steady out of the stalls and sat last in this six-runner race over 1,950 metres. He was ridden with perfect patience by reigning champion jockey Pierre-Charles Boudot. The English raider, MOUNATAIN ANGEL (Dark Angel), trained by Roger Varian, led the race from the off and accelerated coming out of the straight. He gamely held off his challengers, but SKALLETI, who had not moved until two-furlongs out, came easily up the rail to challenge him in the final furlong. SKALLETI, who was supplemented for this Group 2, placed a sharp acceleration to pull away and win by three quarters of a length. MOUNTAIN ANGEL held on easily for second place under Olivier Peslier. The Charlie Appleby-trained LINE OF DUTY (GALILEO) finished almost a length behind in third under WILLIAM BUICK.

Five runners lined up in the Gr2 Qatar Prix Daniel Wildenstein (Gr2), over a mile at ParisLongchamp on the Saturday of the Qatar Prix de l’Arc de Triomphe weekend. IMPULSIF (DUBAWI) led the race at a steady pace, with the favourite OLMEDO (WOOTTON BASSETT) keen in behind. THE REVENANT (DUBAWI), who was making his return to the track having been off since May, sat on the rail towards the rear in the hands of Pierre-Charles Boudot before moving up to stalk the leader in the final turn. Boudot pulled him out in the straight, and once in the clear, THE REVENANT showed his predilection for the soft ground and stormed up the track to put his rivals behind him in just a few strides in an authoritative display. The Jean-Claude Roget-trained and Christian Demuro-ridden OLMEDO finished in second place four and a half lengths further back with the Carlos Laffon-Parias-trained and Maxime Guyon-ridden SHAMAN (SHAMARDAL) completing the podium further three quarters of a length behind. HH Sheikh Mohammed bin Khalifa Al Thani received the Trophy from QREC CEO Nasser bin Sherida Al Kaabi.

The Qatar Handicap Des Juments, a handicap for four-year-old and older mares, was won by MADE TO LEAD (LINNGARI) in the colours of Thierry Marechal. The E. Lyon-trained four-year-old bay mare finished one and a half lengths in front of Mrs P. Brandt-trained and Maxime Guyon-ridden STRONG AND STABLE (MOTIVATOR). The favourite, the R. Le Dren Doleuze-trained and Christophe Soumillon-ridden LADY SIDNEY (MR SIDNEY) was a short head behind in third. The MADE TO LEAD sat towards the rear in the racing pack, making up ground progressively in the turn. She had to wait to find her gap in the straight, coming over to the rail. She then placed a smart turn of foot under jockey Jerome Claudic to secure victory. This was a second win for MADE TO LEAD at this track this year, having won a claiming race in July, marking a return to form on her preferred softer ground.

The exceptional tandem of trainer John Gosden and jockey Frankie Dettori struck again for more Group 1 glory in the Qatar Prix Royallieu (Gr1) with the outstanding race mare ANAPURNA (FRANKEL), in the colours of Helena Springfield. The Epsom Oaks heroine was taking her second Group 1 here, and clearly appreciated the step up to 2,800 metres and the cut in the ground. Dettori once again produced a perfect ride, keeping just enough in hand that when NAPURNA was challenged in the closing stages, she was able to produce a second burst of acceleration to secure victory. The Aiden O’brien-trained and Christophe Soumillon-ridden DELPHINIA, for the Coolmore associates finished in second just over a length away. ENBIHAAR, trained by John Gosden and ridden by James Vincent Crowley finished a further short head behind in third.

HOLDTHASIGREEN back on top in Gr1 QATAR PRIX CADRAN

In the colours of Jean Gilbert, in partnership with Claude Le Lay, Holdthasigreen (Hold That Tiger) put the clock to rights in this year’s Qatar Prix Cadran (Gr1), the marathon that crowns the leading stayer. Last year, he went down by the smallest margin to CALL THE WIND (FRANKEL) in this race, and this year he had his revenge. Trained in France by Bruno Audouin, he won today by three quarters of a length in front of his old rival, with DEE EX BEE (FARHH) completing the podium. Not quite at the top of his game this year, having ended his 2018 season with a win in the Prix Royal Oak (Gr1), HOLDTHASIGREEN was back to his best today following his summer break. He was once again partnered by jockey Tony Piccone. They led from pillar to post, holding off a strong finish from CALL THE WIND.

LA POUTANESCA back in the Winners’ Circle

Third in the Prix Volterra (L) in her early career, LA POUTANESCA (FALCO) was back in the winners’ enclosure for the final race of the day, the Prix Qatar Racing And Equestrian Club. In the colours of Alain Michel Haddad, the mare had not passed the post in front since the 18 March at Compienge in heavy ground. The cut in the track today certainly gave her edge back and the David Smaga-trained filly travelled strongly throughout the race near the leaders. She took the lead a furlong out and battled to hold her lead from the strong-finishing PLANTLOVE (PLANTEUR).