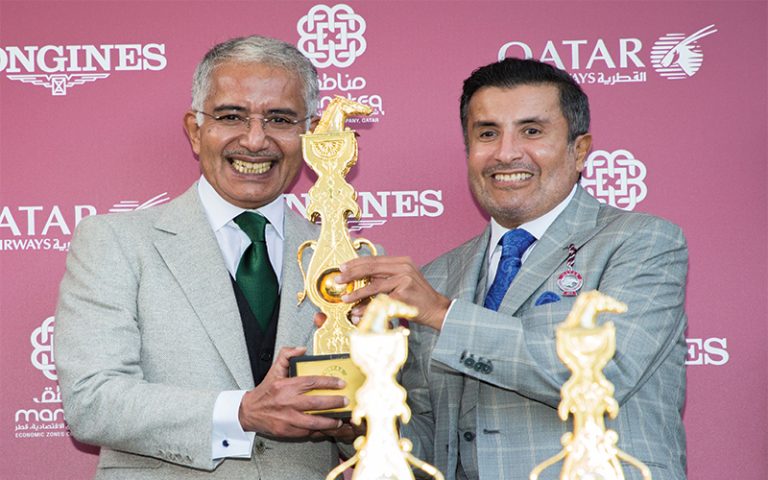 Paris, 7 October 2019 - His Highness Sheikh Abdullah bin Khalifa al-Thani presented to His Highness Sheikh Mohamed bin Khalifa al-Thani the Qatar Arabian World Cup (Gr1 PA) trophy following Ebraz’s victory in the prestigious race at ParisLongchamp yesterday.
Ebraz (Amer) provided His Highness Sheikh Mohamed bin Khalifa al-Thani with his fifth win in the Qatar Arabian World Cup (Gr1-PA). He is now the winning-most owner in this event.
Ebraz, ridden by Maxime Guyon, started as favourite. Trained by Julian Smart, he sat patiently down the field, with plenty of running. On the straight, however, he stormed down the track to take the lead from Al Shaqab Racing’s Khataab (Amer), trained by Thomas Fourcy and ridden by Jerome Cabre, who battled bravely and finished second three quarters of a length behind his half-brother.
The P. Collington-trained and Jean-Bernard Eyquem-ridden Mashhur Al Khalediah held on to third place almost a further length behind.
“It’s for days like this that we race”, commented winning trainer Julian Smart. “I am very lucky to train horses such as Ebraz for His Highness Sheikh Mohamed. That’s five wins now in this race, not bad at all! Ebraz won the HH The Amir Sword (Gr1-PA). I don’t normally train horses that shine at that age.
“They tend to be at their best later. He has won the best race in the world at the age of 6 and we are dreaming of next year. We do expect Ebraz to follow the example of Gazwan and continue his excellence for one or two years.
“My boss has had an amazing weekend after his wins on Friday and Saturday, so there was no pressure today and we’ve added a new victory, which is the most prestigious!”
The Qatar Racing & Equestrian Club (QREC) CEO Nasser bin Sherida al-Kaabi congratulated His Highness Sheikh Mohamed bin Khalifa al-Thani for winning the Qatar Arabian World Cup.
“Ebraz’s victory has been admired by everyone”, he said, “It is a well-deserved win in a high quality field. Although it was a soft ground, Ebraz confirmed his class and excellence in prestigious races as he has already done in more than one group 1 event this season.
“The Qatar Prix de l’Arc de Tiomphe is fully successful in terms of organisation, turnout and results of Qatari-owned horses over three days. This very positive outcome highlights the value of the efforts and hard work by all racing officials and horse owners in general to ensure Qatar’s presence in the winners’ enclosures in such world-class races and events.
“Everyone agrees this is the best edition of the Qatar Prix de l’Arc de Triomphe weekend, especially in terms of the results realised by Qatari-owned horses. We look forward to maintaining this success in the coming editions.
The President of the Qatar and the Asian Equestrian Federations and QREC Vice Chairman Hamad bin Abdulrahman al-Attiyah said: “We congratulate His Highness Sheikh Mohamed bin Khalifa al-Thani for winning the Qatar Arabian World Cup for the fifth time in this magnificent Qatar-sponsored event.
“I would like to thank His Highness Sheikh Abdullah bin Khalifa al-Thani and His Highness Sheikh Mohamed bin Khalifa al-Thani for their presence and supporting us in the prestigious event, especially as they have always added to horseracing both in Qatar and overseas.
“The Qatar Prix de l’Arc de Triomphe weekend is very special. The presence of Qatari-owned runners in several races is, in itself, a significant gain apart from the results. Being present in such an iconic event really counts as it reflects the progress of Qatar’s horseracing and the efforts to maintain and enhance its global standing.”