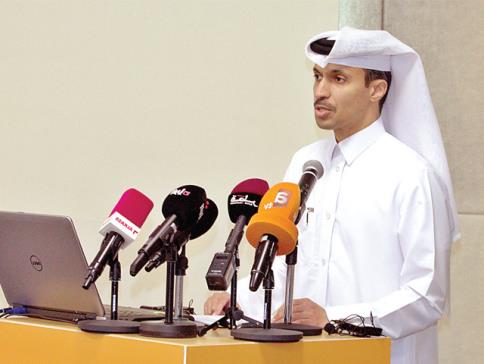 Doha, 15 October 2019 - The Qatar Olympic Academy held a seminar titled “Education and Development of the Olympic Movement” on the sidelines of the ongoing ANOC World Beach Games.

The seminar, which touched topics such as the role of the Olympic movement in the development of people, the importance of women’s participation in the Olympics as well as the reasons for the competition between countries to host the Olympic Games, was addressed by prominent figures, led by HE the Assistant Chief of the Amiri Diwan Sheikh Saoud bin Abdulrahman Al Thani, Secretary-General of the Qatar Olympic Committee HE Jassim Rashid Al Buainain, ANOC Secretary-General Gunilla Lindberg, Executive Director of the Asian Olympic Council Hussain Al Musallam, Director of Olympic Solidarity and NOC Relations at the International Olympic Committee James Macleod, President of the International Olympic Academy, Isidoros Kouvelos and Executive Director of the Qatar Olympic Academy Saif Mohamed Al Nuaimi.

“The QOC is more than ever determined to inspire, connect and excite communities through the power of sport, which has the potential to bridge cultures and foster friendships among the peoples of the world. This cannot be achieved without the great support of His Highness the Amir Sheikh Tamim bin Hamad Al Thani,” he said.

He expressed his delight at participating in the seminar, stressing that he has been involved with the Qatari Olympic Movement for a long time.

He said that Qatar has succeeded in laying the foundation stone for organising sports events since the hosting of the 15th Asian Games (2006), pointing out that this resulted in the establishment of the Aspire Academy, which has now become a beacon for aspiring athletes.

He also praised the great role played by the Qatar Olympic Academy, pointing out that there must be a strategy that is always linked to the aspirations of the State, and perhaps the organisation of the Asian Games encouraged us to host many world championships and other important sporting events.

He highlighted that Qatar has succeeded in establishing many sports facilities, including the anti-doping laboratory, which is the first such lab in the Middle East.

Hussain Al Musallam, Executive Director of the Asian Olympic Council, congratulated Qatar on hosting the inaugural ANOC World Beach Games in a very short period of time, which he said indicates the ability of Qataris to host any continental or international tournament. “Sporting events leave a legacy for host countries and therefore we have to teach young people and future generations the value of the Olympic Movement in the development of people,” he said.