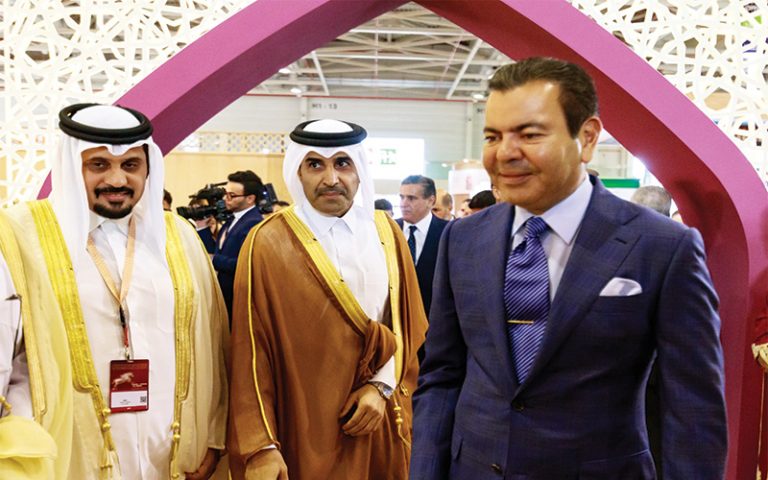 Rabat, 16 October 2019 - Under the patronage of King Mohamed VI of Morocco, the 12th edition of the Salon du Cheval was inaugurated at the Mohammed VI Exhibition Centre in El Jadida, Morocco, on Monday.
The Qatar Racing and Equestrian Club (QREC), the Platinum Sponsor of the 12th edition of the event, is participating in the week-long event to promote Qatar’s equestrian sport.
Prince Rachid officially inaugurated the Salon on Monday afternoon. Also present during the opening ceremony were Moroccan Royal Equestrian Federation president Prince Abdellah Alaoui, QREC chairman Issa bin Mohamed al-Mohannadi, QREC CEO Nasser bin Sherida al-Kaabi, QREC Board member Ahmad bin Mohamed al-Abdumalik, Faisal bin Mohamed Abdullah al-Harmi, the Counsellor of the Qatar Embassy in Morocco, representing Fahad bin Ibrahim al-Hamad al-Mana, the ambassador of Qatar to Morocco, and Salon du Cheval officials.
Prince Rachid inaugurated the Salon with a large participation and significant attendance from several countries given that the Salon has become a landmark in Morocco in general, and in the city of El Jadida in particular every year. He toured the Salon, starting with the stand of Qatar as QREC is the Platinum Sponsor of this year’s edition.
QREC chairman al-Mohannadi presented a memento to Prince Rachid expressing Qatar’s pride in participating in the prestigious equestrian salon every year.
Following Prince Rachid’s tour of the Salon, a wonderful horse show was held and attended by all participants. The show included several Moroccan arts and techniques of horse riding and the equestrian sport. There was a huge turnout, since the Moroccans are keen to attend the event every year.
The organising committee expects the total number of visitors to reach at least 300,000 as was the case last year. The visitors usually flood to the Salon to enjoy all the events, stands of the participating countries as well as the Moroccan heritage equestrian-related activities.
QREC’s delegation to this year’s edition also includes Racing manager Abdulla bin Rashid al-Kubaisi, Head of Horse Show Section Hassan bin Abdulla al-Mannai, and Hesham bin Mohamed al-Ali, manager of the offices of the QREC Chairman and the QREC CEO.

Another year of success for Josoor Institute