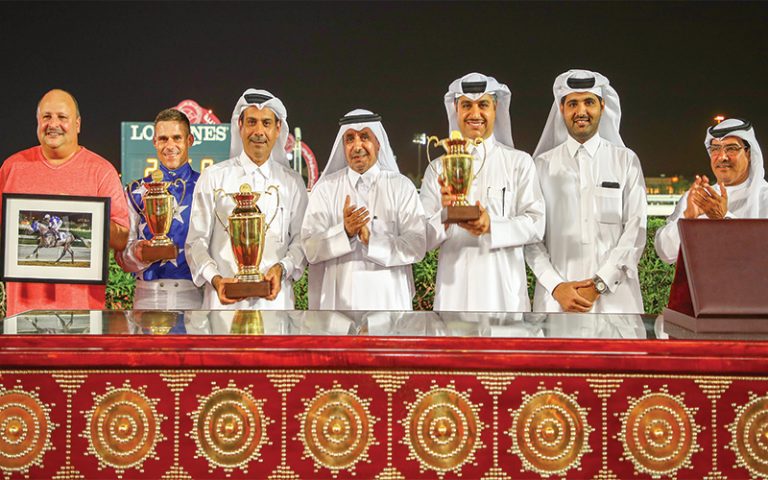 The owner-trainer-jockey trio of Injaaz Stud, Gassim Mohammad Ghazali and Alexis Pouchin combined well for the second straight race on Wednesday evening when IZZTHATRIGHT (Moss Vale x Miss Adelaide) topped the THOROUGHBREDS (Class 2) event in comfortable fashion. Pouchin had ridden the gelding to fifth place last time out but this time guided the 7yo to a breezy win with three lengths and three quarters to spare for the horse’s 19th career victory in 32 races.

Injaaz Stud’s AL MUSTAFIZ (AF AlBahar x Djimana) led a one-two for Champion Trainer Gassim Mohammad Ghazali in the LOCAL PUREBRED ARABIAN CONDITIONS. The 6yo had a C&D handicap victory 10 months ago, and the colt proved that the conditions are right in his comfort zone as he cantered well under apprentice rider Alexis Pouchin on the inside, before increasing his pace as another Ghazali ward, Rassan attacked coming off the final bend. Al Mustafiz however did well to win comfortably by a two lengths and a quarter for his fourth career win.

Dr. Ahmed Mohd Hasan Al-Sulaiti & Sons’ KHOR AL ADAID (Amer x Si Vous Plait) had a string of top three finishes to cap his last season, and the 7yo had enough in him to keep the momentum going on Wednesday as the Ahmed Mohamad Kobeissi’s ward topped the PUREBRED ARABIAN HANDICAP (75 & below) in thrilling fashion. Tomas Lukasek and his mount edged out Umm Qarn’s Badda by a short head to pick up a victory after almost two years over C&D. It was the second victory on the day for both Kobeissi and Lukasek.

Ahmed Mohamad Kobeissi saddled BEACH SAMBA (Lope De Verga x Braziliz) had finished in the frame over C&D to cap his season last time round. On Wednesday the 7yo partnered with the Qatar Derby-winning jockey Ryan Curatolo for the first time, and made it back as a winner for Hassan Ali Alabdulmalik for the first time since February of 2015 and only the second time in his 57 race career so far. The gelding edged out Gassim Mohammad Ghazali trained Tadeem by a nose at the post for a thrilling win in the THOROUGHBRED HANDICAP (Class 5) (75 & below).

After hitting the frame on four straight occasions last season, Injaaz Stud’s RAJAB (Harran ASF x Fiha) finally stepped into the winner’s circle, topping the PUREBRED ARABIAN MAIDEN PLATE. The six furlong sprint saw the gelding step down in distance and partnered JP Guillambert well to race to a victory at the post with a length and a quarter to spare, which also opened the account for the season for Champion Trainer Gassim Mohammad Ghazali.

Abdulaziz Saleh Al Jaber’s SOUTHERNMACHOMAN (Mucho Macho Man x Deep South) made a winning debut in Qatar with a fantastic win in the opening race of the season – THOROUGHBRED MAIDEN PLATE (Class 6) – on Wednesday. In the 1100m dirt race, Hadi Nasser Rashid Al Ramzani’s ward took charge coming off the final bend in the sprint, and then pulled away as Tomas Lukasek rode the first winner of the season with a little more then four lengths to spare.