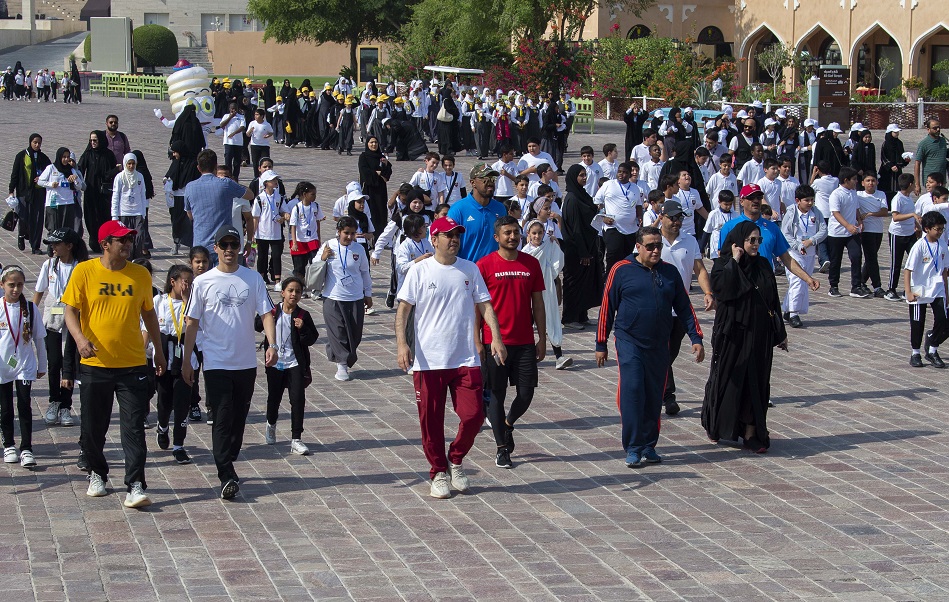 Doha, 3 November 2019 - The Qatar Olympic Committee (QOC) marked the World Walking Day, which is organized annually under the Association For International Sport for All (TAFISA), at the cultural Village Foundation (Katara) on Thursday.

Around 400 students from 15 primary and preparatory schools took part in the event, which was attended by HE Secretary General of QOC Jassim Rashid Al Buenain, in addition to a number of veteran athletes and celebrities, including Majid Al Khulaifi, Talal Mansour, Hussain Al Rumaihi, Abdul Aziz Hassan and Yassin Ismail.

Marking the World Walking Day is part of QOC's Community Program Plan, which aims to spread the concept of sport for all in addition to highlighting the importance of sports in general and walking in particular.

The event started with educational and awareness lectures, at Katara's drama stage, on healthy nutrition, physical activities and rationalization of electricity and water consumption. Afterwards, participants walked for one kilometer to Katara beach.

HE QOC Secretary-General said that marking the World Walking Day reflects the Olympic Committee's goals of spreading the concept of sport for all and making sport a daily habit. He extended thanks to all the participants and sponsors of the events.

Director of Sports affairs in Qatar Olympic Committee Khalil Al Jaber voiced the QOC's keenness on consolidating the concept of practicing sports in all times and types.

For his part, former Qatar football player Abdulaziz Hassan expressed happiness at partaking in the event and urged the participants to dedicate certain time for walking everyday.