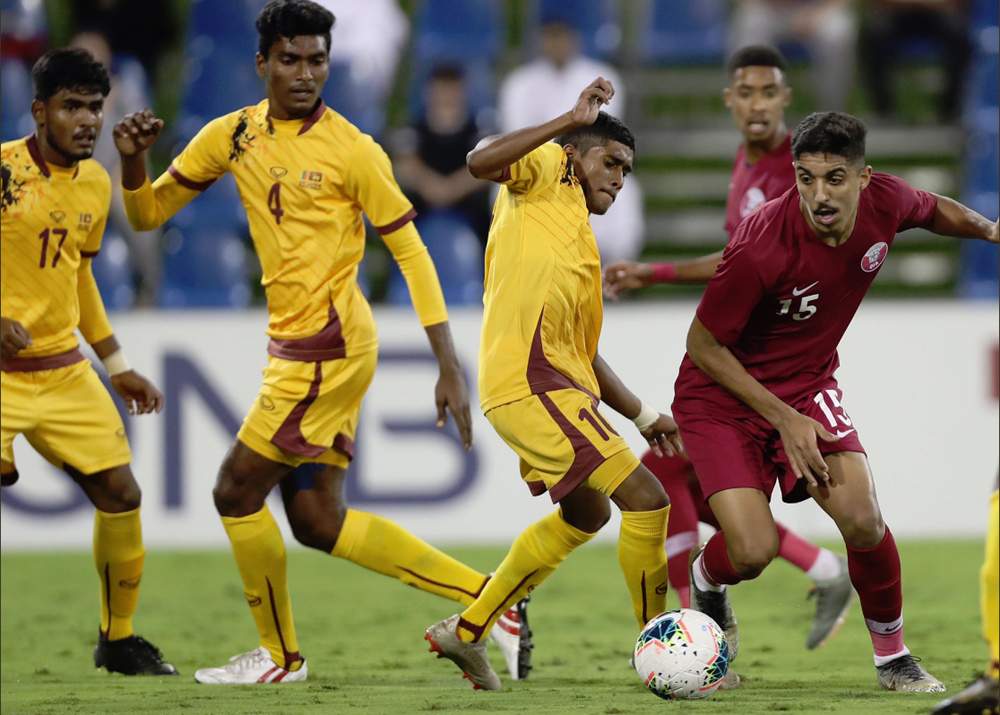 Doha, 7 November 2019 - Hosts Qatar powered past Sri Lanka to win 5-1, with striker Mekki Tombari starring with an impressive brace in the AFC U-19 Championship Uzbekistan 2020 Qualifier at the Aspire Pitches yesterday.

Playing on home soil, Qatar came into the match as warm favourites and that assessment appeared accurate when Tombari cut inside and scored within five minutes. A brace header from Mostafa Kadira made it 2-0 with 19 minutes gone, and it looked like Sri Lanka would be in for a long night when Tombari scored his second in the 44th minute, tapping into an empty net after Sri Lankan goalkeeper Mohamed Mursith spilled Jassim al-Zarra's initial effort.

But just as Qatar looked to be in total control, Sri Lanka struck back with a quite superb long-range strike from substitute Mohamed Shabeer, who left Qatar goalkeeper Yousef Balideh stunned, and the small knot of Sri Lankan fans delighted, in the 45th minute.

That goal gave Sri Lanka hope, but there was no stopping Qatar, who went further ahead when Avishka Deshan turned the ball into his own net in the 59th minute, before al-Jarra finished off a lovely move with a sweet strike into the bottom corner five minutes later.

Qatar continued to chase goals, and they would have found further joy had it not been for a succession of shots denied by the woodwork, but the margin stayed at 5-1 as the hosts began their AFC U-19 Championship Qualifiers campaign in style.

Earlier, Yemen withstood a second-half recovery from Turkmenistan to claim a 2-1 win. First goals from Mohamed Abdulwahab al-Thulaia and Ahmed Maher gave Yemen a commanding 2-0 lead at half-time, but a goal from Igor Sekov shortly after the interval gave Amin al-Sunaini's side a challenge in a highly competitive second half.

Both Yemen and Turkmenistan showed a desire to hunt for an early goal, but it was the former who were the first to get on the scoresheet thanks to al-Thulaia's penalty kick at the quarter-hour mark.

The striker found the back of the net despite a touch from unfortunate Turkmenistan goalkeeper Amanmuhammet Orayev, although the goal owed much to the work of Yemen captain Muneef Jassar, whose ball into the penalty area was handled by Erik Sakayev to win the spot-kick in the first place.

Shamammet Hydyrow sent a free-kick narrowly over the crossbar as Turkmenistan looked to strike back, but Yemen promptly extended their lead through Maher, who outpaced two defenders before scoring with a clever toe-poke on the outside of the boot, which snuck in at Orayev's near post to make it 2-0 after 26 minutes.

Facing a two-goal deficit and having enjoyed only 30 percent of first half-possession, Turkmenistan had a mountain to climb going into the second period, but they made some headway through substitute Igor Sekov in the 48th minute.

Sekov, who had been introduced only three minutes earlier, justified Aziz Kambaraov's tactical switch when he scored with a long-range effort which bounced awkwardly in front of Yemen shot-stopper Abdullah Abdulhakim al-Sadi, who succeeded only in fumbling the ball into the net.

The stage was set for Turkmenistan to storm back into contention, but Yemen stood firm – with their cause aided when Turkmenistan's Ruslan Priyev's was sent off in injury time – to claim three valuable points on the road to Uzbekistan.