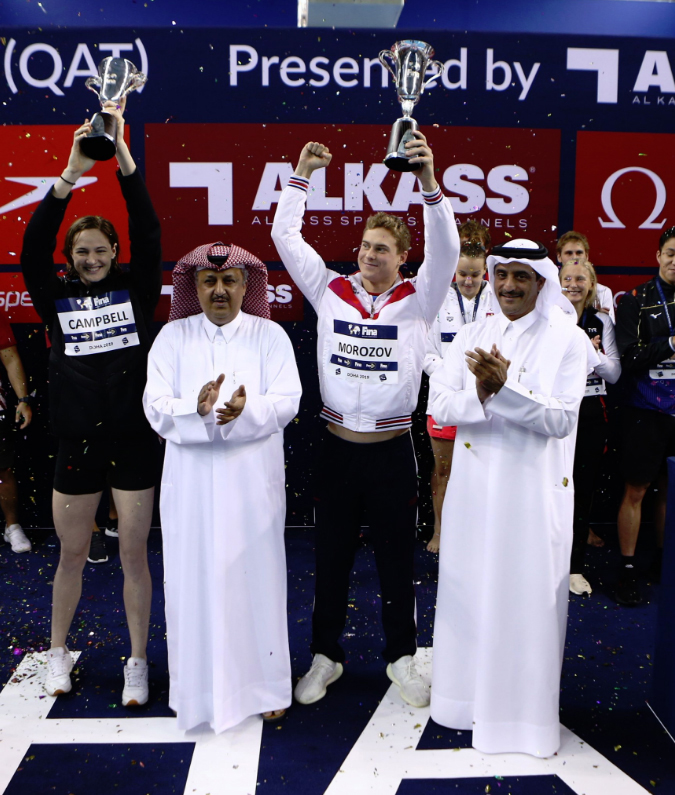 Morozov and Campbell also won cluster 3 with 69 and 114 points respectively.

While Morozov's (333 points) World Cup title for the second year in a row was confirmed, Campbell (357 points) sealed the overall trophy after winning the 100m freestyle to beat Katinka Hosszu (HUN), who finished second with 312 points.

Meanwhile, Campbell clocked 52.61 for her victory on Saturday - her second gold in Doha this year.

Campbell said: "I really pushed myself hard this year and I couldn't ask for a better World Cup campaign. Most importantly, I am happy with my time. I want to thank all the people who helped me made this possible."

Hosszu, who looked determined to win the overall title, clinched two more gold on the last night but fell short in the points tally.

"This is my second best time (100m butterfly), and I am very happy about it. Winning is always special," said Hosszu.

Danas Rapsys also grabbed the spotlight after completing a clean sweep of titles in men's 200m freestyle, clocking 1:45.50 for the victory.

America's Michael Andrew was another star on the final day, storming to victories in two finals. He clinched the men's 50 butterfly in 22.94 - his second fastest time. Szebasztian Szabo (HUN) - 23.34 and Riku Poytakivi (FIN) 23.60 - claimed silver and bronze medals.

"My second sub 23, I am super happy. I will get back to training," said Andrew.

Barely 15 minutes after winning his first gold medal, Andrew returned to the pool to capture the 100m backstroke victory - his second of the night.

In a thrilling men's 200m breaststroke final, Chupkov edged Arno Kamminga (NED) to win gold in 2:08.37. Kamminga touched the wall in 2:08.39 for the second position.

Emily Seebohm (AUS) scooped women's 200m backstroke gold after a close race with her team-mate Kaylee Mckeown. Seebohm clocked 2:08.54, while Grabowski was just behind, finishing the race in 2:11.31.

Over 200 swimmers from 44 countries took part in the FINA Swimming World Cup Doha 2019, which the Qatari capital hosted for the eighth consecutive year.