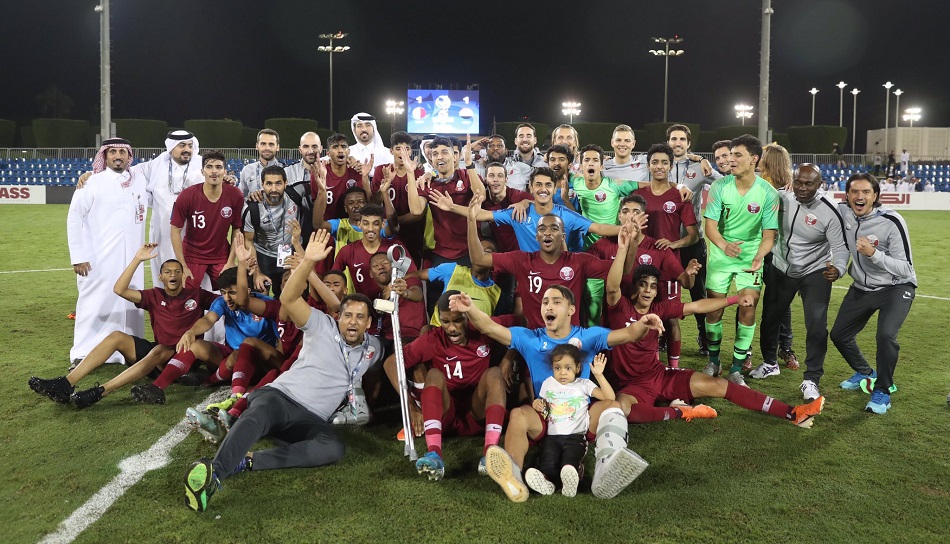 Doha, 11 November 2019 - Qatar held off a fast-finishing Yemen to qualify for AFC U-19 Championship Uzbekistan 2020 as Group B winners after a thrilling 1-1 draw on Monday.

The group hosts have goalkeeper Yousef Abdullah to thank for their success, after his brilliant penalty save denied Yemen's Mohammed Abdulwahab Al Thulaia a would-be winner late in the second half.

Yemen's haul of seven points means they are highly likely to qualify as one of the four best second-place finishers, while Turkmenistan, who beat Sri Lanka 4-2 in the early match, finished third.

Qatar held on to secure the draw they needed to win the group on goal difference, but only after withstanding a fighting second-half display from Yemen in Doha.

With Qatar's heavy earlier wins over Sri Lanka and Turkmenistan meaning simply avoiding defeat would secure their place in the Finals, the group hosts relied on a strong save from Abdullah to prevent Jassem Abdulsallam from turning the ball into his own net in the 10th minute.

Having survived that scare, Qatar took the lead three minutes before half-time, with a firmly struck free kick from captain Naif Abdulraheem Al Hadhrami finding the net from 25 yaerds after taking a touch from Yemen's Muneef Jassar.

Fabio Cesar's side looked relatively safe at the interval, but Yemen came storming back into contention with a terrific second half performance, as Qatar struggled to keep them bay after a wave of dangerous attacking moves.

Their excellent football was rewarded in the 53rd minute, when Ahmed Maher got in behind the defence thanks to a sublime pass from Saad Al Qaaod before beating Abdullah with a precise finish to make it 1-1.

While a draw could potentially see both teams through to the Finals, Qatar knew their AFC U-19 Championship would be likely to come to an abrupt end with a defeat, and their future in the tournament must have flashed before their eyes when Yemen were awarded a penalty after Talal Ibrahim Faraj handled the ball in the penalty area.

But Abdullah saved his teammates blushes, saving not only from Al Thulaia's spot kick, but also blocking the Yemeni striker's effort on the rebound, with the whistle blowing for a foul to render Al Qaaod's subsequent bundling of the ball into the net inconsequential.

Abdullah's heroics meant Qatar survived the most dangerous moment of the match, ultimately securing their place in the finals, and leaving Yemen to wait on the final results from elsewhere before joining them in celebration.​