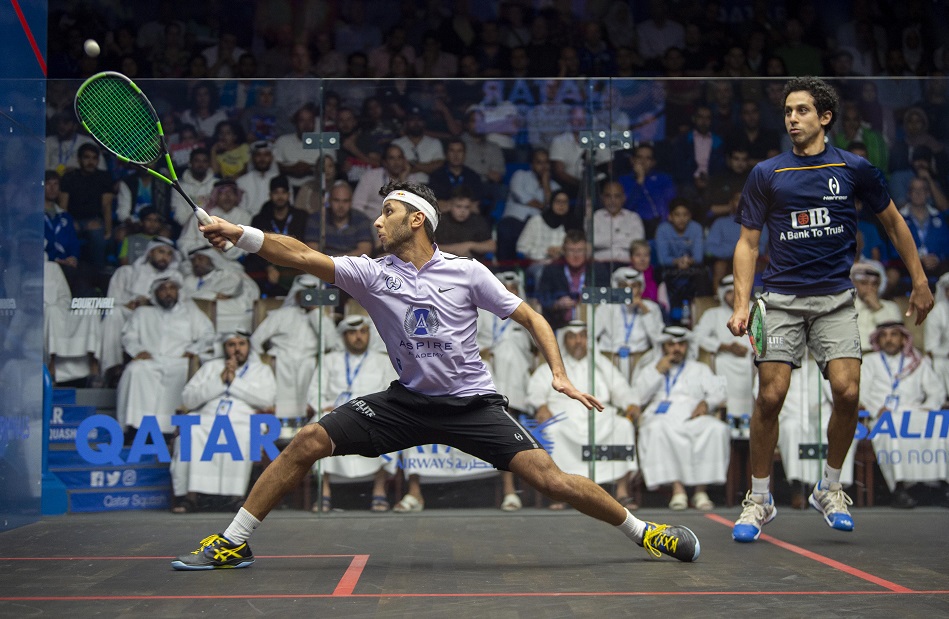 Doha, 12 November 2019 - -Despite losing to second-seed Tarek Momen, world No.47 Abdulla Mohammed Al Tamimi can definitely raise his head with pride as he gave a performance worthy of great applause in the last pre-quarters match of Day 4 of the ongoing PSA Men's World Championship in Doha on Monday.

Reaching this stage of the tournament has been a dream come through for the 24-year-old Aspire Academy graduate who became the first Qatari player to reach the pre-quarters of the World Championship after scripting a straight-game defeat of the 28th-ranked Mathieu Castagnet of France on Saturday.

Momen, who also accounted for Tamimi's defeat at the US Open Championship in October, will next face World No.7 Diego Elias who got the better of Egypt's Fares Dessouky 3-1 (10-12, 11-8, 11-6, 11-4) in the other match of the day to become the first Peruvian in history to reach the quarter-finals of the PSA Men's World Championship.

“The match was very tough and I must commend Tamimi for putting up such a fight. He is a dogged and promising player. I admire his fighting spirit and I wish him nothing but the best. I am happy with today's victory and I look forward to the next match against Elias which promises to be exciting as well. I will continue to give my best as I hope to win this championship," said the 31-year-old Momen.

“The match was tough and we both gave good accounts of ourselves. The match could have gone both ways but in the end the better player won. Congratulations to Momen for winning and I wish him the best at this tournament," Tamimi said during the post-match press conference.

On the other hand, Germany's Simon Rösner on Monday claimed a straight game victory over Wale's Joel Makin to emerge the first man to book a place in the quarter-finals thereby setting up a clash against England's James Willstrop, who accounted for the exit of tournament's third-seed Karim Abdel Gawad in another match of the day.

For Rösner, Monday's match inside the glass court of the Khalifa International Tennis & Squash Complex in Doha against the in-form 12th-ranked Makin was arguably one of his best performances of the season.

The pair have had contrasting fortunes in the opening months of the 2019-20 PSA World Tour season, with Rösner dropping out of the top five after two quarter-final appearances in four tournaments, while Makin is coming off the back of a first ever PSA Platinum semi-final at the CIB Egyptian Squash Open last week.

But the formbook went out of the window in Qatar as Rösner played some sublime squash en route to claiming an 11-8, 11-8, 11-5 victory to book his spot in the last eight of the prestigious tournament for the second time in his career.

“Having not had the best few weeks lately, it's very good to get a win against someone who is in form like Joel at the moment, beating Tarek last week. It's a big confidence boost for me and I need to take this kind of form into the next rounds and I'm looking forward to it," Rösner said.​