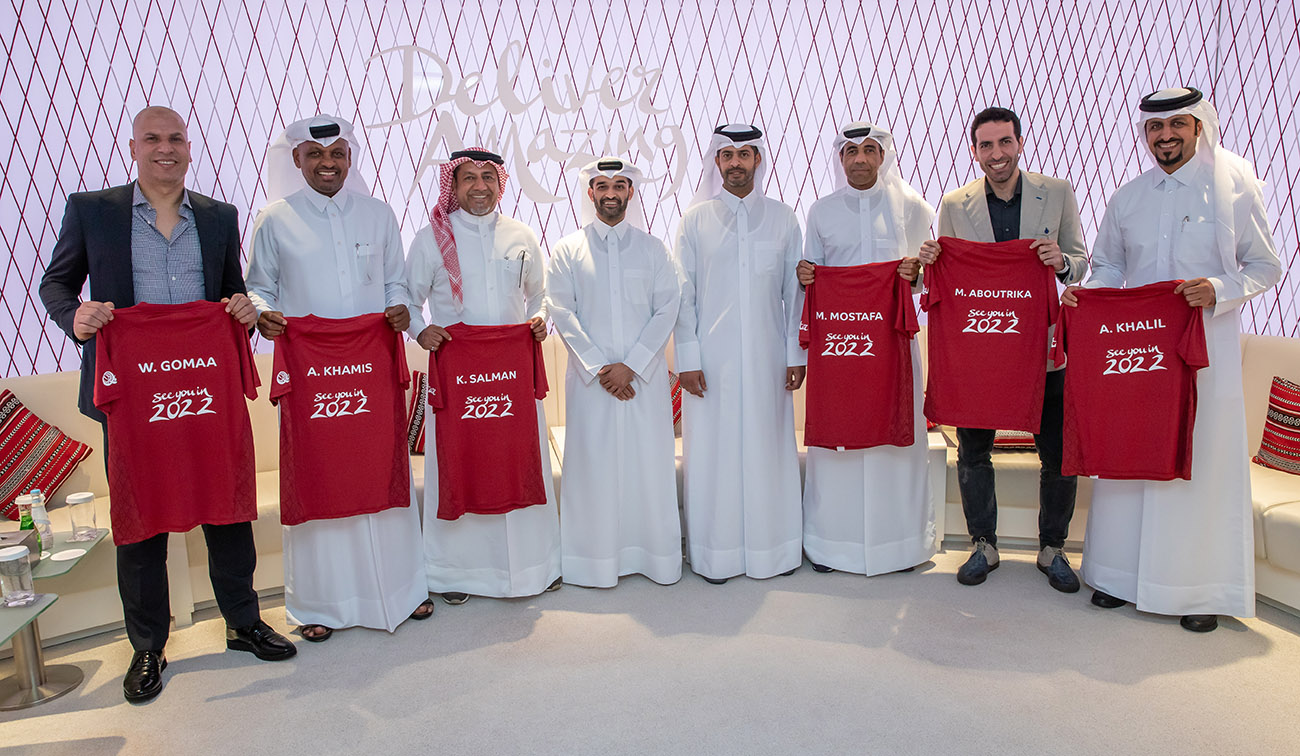 Doha, 26 November 2019 - The Supreme Committee for Delivery & Legacy (SC) – the organisation responsible for delivering tournament infrastructure for the FIFA World Cup 2022 – has announced that 10 new local and regional stars have joined its ambassador programme.
The SC ambassador family already consists of global icons Xavi Hernández, Samuel Eto'o, Cafu and local star Mohamed Saadon al-Kuwari. Joining them now are Ali al-Habsi, Mobarak Mostafa, Ibrahim Khalfan, Adel Khamis, Ahmed Khalil, Khalid Salman, Mohamed Aboutrika, Younis Mahmood, Bader al-Motawaa and Wael Gomaa, sc.qa reports.
The announcement comes ahead of the kick-off of the 24th Arabian Gulf Cup – where the group will be presented to fans and media during host nation Qatar's opening game against Iraq Tuesday.
Among the new arrivals are five Qatari nationals, two Egyptians and one from each of Iraq, Kuwait and Oman.
Welcoming the new ambassadors, SC secretary-general Hassan al-Thawadi said: "We are proud and delighted to today announce our new cohort of ambassadors. We launched this programme in order to work alongside some of our game's best known and most widely respected names to amplify the tremendous work Qatar is carrying out in preparation for the delivery of the FIFA World Cup 2022 – this new group reflects exactly those qualities.
"From the very first days of the bid, we have always said this World Cup is one not only for Qatar, but for the entire Arab world. That our region is so well represented among the new members of our family is a source of great pride for me personally, but also a poignant symbol of the power of sport and sporting events such as the World Cup in bringing nations and regions together as one. I look forward to working closely with each of our new ambassadors over the coming years."
Established by the SC in 2018, the ambassador programme works alongside some of the game's most iconic stars to help deliver and promote the numerous legacy programmes and infrastructure projects associated with the Arab world's first FIFA World Cup.
As well as working to promote the work being carried within the borders of Qatar, the new joiners will also take on ambassadorial roles across the region to amplify the progress of legacy programmes such as Generation Amazing – a football for development CSR programme that has already reached more than 500,000 recipients from underprivileged communities across the world.
They will also play an active role in the Community Engagement functions of the SC. The department works with Qatar's numerous and diverse local and international communities to provide engagement opportunities in order to ensure Qatar 2022's preparation encompass all, and its legacy is long lasting and far-reaching, the report states.
Mostafa, who played for the Qatar national team on 82 occasions, added: "Every Qatari remembers where they were on the day our country was awarded the rights to host the 2022 World Cup. It is a moment we will all remember forever, so today to officially become part of that journey with the Supreme Committee is a source of great pride. I look forward to the next few years more than words can express."
Al-Habsi, Oman's legendary goalkeeper, added: "As Arabs, we were all delighted to see the game's biggest event come to our part of the world. We have always felt part of the overall journey, and showcasing this region to the world is a responsibility we all take incredibly seriously. I look forward with relish to playing my part in supporting Qatar's World Cup."