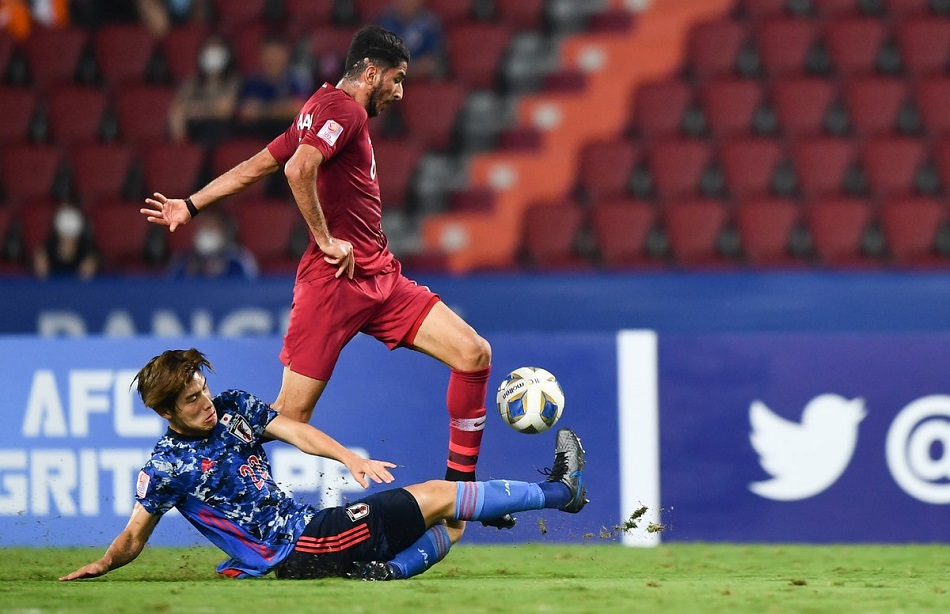 Felix Sanchez's side needed to win to advance to the quarterfinals for the third tournament in a row but a resolute performance by Japan, despite Ao Tanaka's sending off in the dying seconds of the first half, ensured the 2016 champions salvaged a draw.

The Japanese went into the final Group B match looking to reclaim some pride having been eliminated from contention for a place in the next phase following back-to-back defeats in their opening games against Saudi Arabia and Syria.

Hajime Moriyasu's side looked the more likely to take the lead, with Yuki Soma sending a searing ball low across the area 11 minutes into the game that, agonisingly for the Japanese, no one in a blue shirt was able to reach.

Reo Hatate went closer three minutes later when he was given time and space in the box thanks to Shunta Tanaka's lofted pass, only for goalkeeper Mohammed Al Bakri to smother the shot.

Soma was having considerable joy down Japan's right and he again threatened to unlock the Qatar defence as he found Daiki Sugioka eight yards from goal. The Shonan Bellmare wing-back, however, steered his effort harmlessly across the target.

The chances kept coming for Japan, with Hatate mis-kicking when he should have hit the target before Shunta Tanaka shot wide despite having time and space to do better. Qatar, in contrast, had been limited to Jassem Abdulsallam's tame shot from outside the area.

However, with only seconds left in first half injury time, the Japanese were reduced to 10 men when referee Muhammad Taqi dismissed Ao Tanaka for a foul on Yusuf Abdurisag after consulting the Video Assistant Referee.

Despite their numerical advantage, Qatar struggled. Nasser Alahrak ballooned his shot over the bar 10 minutes into the half while Ahmed Alhamawende sent a free-kick high over the bar.

Instead it was Japan who opened the scoring in the 73rd minute as Koki Ogawa picked up possession from Ryotaro Meshino 20 yards from goal and beat Albakri with a low drive to the goalkeeper's right.

Six minutes later Qatar were level when Alahrak converted confidently from the penalty spot after Mitsuki Saito clipped the heels of Khalid Mazeed, but the West Asians were incapable of finding the winner and, in the end, both teams slid out of the competition.

Saudi Arabia topped the group courtesy of a 1-0 win over Syria who will join them in the last eight thanks to their second-place finish.