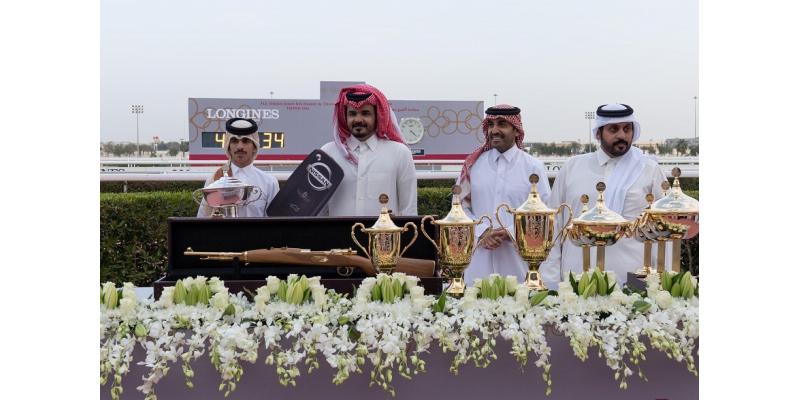 In the 2200m finale of the 10-race meeting, Khalifa Bin Sheail Al Kuwari’s THE BLUE EYE (Dubawi x Soneva) made it two victories in a row to win the H.E SHEIKH JOAAN BIN HAMAD AL THANI TROPHY (4yo & older T/B) in spectacular fashion. Ronan Thomas ridden NOOR AL HAWA (Makfi x Majestic Roi) had taken the advantage in the final furlong of the race but was edged out at the post by Gassim Mohammad Ghazali trained The Blue Eye under Theo Bachelot by a quarter of a length. The 2018 Qatar Derby winner FULL MOON (Declaration Of War x Dowager), owned by Hassan Ali Alabdulmalik and trained by Deborah Amanda Clare Mountain, completed the top three under Pierantonio Convertino.

After missing out narrowly on victories on his first two outings this season in Qatar, Umm Qarn’s TAYF (Amer x Djelmila) won the H.E Sheikh Joaan Bin Hamad Al Thani Trophy (Gr3 PA) (4yo & older) in fine fashion. The 8yo led a sweep for trainer Alban Elie Marie De Mieulle, with stablemate BIN GENERAL (General x Noorah) and Al Shaqab Racing’s GTNAH (TM Fred Texas x Mayada) finishing second and third respectively. Soufiane Saadi had Tayf follow leader Bin General, ridden by Ronan Thomas, and the Tomas Lukasek-ridden MAXR for the bulk of the 2200m race. Coming off the bend, TAYF took the advantage and stayed unchallenged even as BIN GENERAL held his own with the Faleh Bughanaim-ridden GTNAH joining the party upfront in the final furlong. It was TAYF’s first win since May 2019 when he won at ParisLongchamp.

Qatari rider Faleh Bughanaim rode his fourth winner of the season when he guided Al Shaqab Racing’s AL NAAMA (Majd Al Arab x Entisar) to a fantastic victory in the H.E Sheikh Joaan Bin Hamad Al Thani Trophy (P/A). The victory in the miler was the mare’s third straight having won a Conditions race in December and a Group 2 last month. Bughanaim had his 6yo mount take charge on the home straight and off to a memorable victory.

Al Jeryan Stud’s ARABIC CHANNEL (English Channel x Mahogany Lane) led a one-two for trainer Mohammed Nasser Al Naimi. In the H.E Sheikh Joaan bin Hamad Al Thani trophy (4yo & older T/B), the 4yo had Tomas Lukasek in the saddle and the two returned the same result as their season opener in October. The seven-furlong race saw ARABIC CHANNEL win by half a length as another Al Naimi ward, VENEDEGAR, ran out of track under Alexander Reznikov.

Al Jeryan Stud’s AL LUSAIL (Footprintinthesand x Gooey) showed a fantastic turn of foot in the final furlongs of the H.E Sheikh Joaan Bin Hamad Al Thani Trophy (4yo & older L T/B) to win for the third time this season. In the 1750m race, Ronan Thomas had the Mohammed Nasser Al Naimi-trained 6yo in the front and then dealt well with the traffic on the home straight before picking up the pace and winning by one and a quarter lengths.

After missing a victory twice since his arrival in Qatar, Al Wasmiyah Farm’s THINK BIG (Night Of Thunder x Avenue Montaigne) finally emerged victorious at Al Rayyan Park. The Georges Mikhalides-trained colt had two straight runner up finishes, including over C&D last time round. On Saturday, the 3yo and his partner Tomas Lukasek pulled away from the field 300m out in the seven-furlong H.E Sheikh Joaan Bin Hamad Al Thani Trophy (3YO T/B) and breezed to a three and a half-length win.

Abdulhadi Mana Al Hajri’s DARK PURSUIT (Pastoral Pursuits x Ogre) was in the winner’s circle for the second time this season, having missed out on a victory in December and in the season opener in October. With Luca Maniezzi in the saddle once again, Stefano Ibido’s ward won a thrilling duel with the Ivan Rossi ridden-Connery, bagging the H.E Sheikh Joaan Bin Hamad Al Thani Trophy (3yo & older T/B) by a nose.

Osama Omer Al Dafea’s TAHAR (TM Fred Texas x Insaf) was once again ridden to a victory by Ryan Curatolo around the Al Rayyan Park. The Frenchman had ridden the 5yo to a maiden victory in December over a mile and the two got together once again after a few midfield finishes in between, for the Local Purebred Arabian Novice Cup. This time round the duo beat the Tomas Lukasek-helmed MURIHK by a short head at the post.

Umm Qarn’s ASHOURA (Tabarak x Dherwah) made a fantastic debut on Saturday when the Alban Elie Marie De Mieulle-trained filly won the first race of the big meeting. In the seven-furlong Local Purebred Arabian Maiden Plate, the 4yo breezed through to a victory with four and three-quarter lengths to spare with Soufiane Saadi in the saddle.