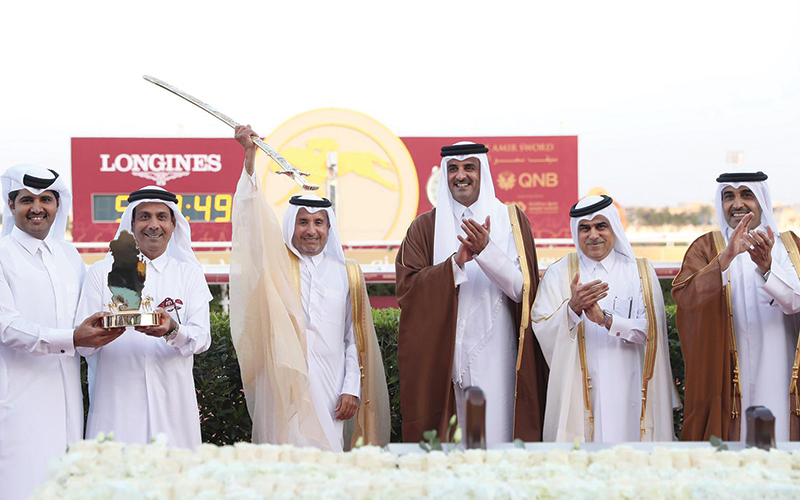 The Julian Smart-trained EBRAZ (Amer x Massamarie) showed some late pace on the long home straight to complete not only a treble of the HH THE AMIR SWORD (GR1 PA) (Sponsored by Al Hazm) (4yo & older PA), but also won the Triple Crown, having won at Goodwood and Longchamp last year. Stablemate Aaley Al Magam set the pace in the 2400m race with Umm Qarn’s Chamekh and Yazeed not too far behind. As Aaley Al Magam weakened on top of the straight, YAZEED (Munjiz x Al Dahma), ridden by Olivier Peslier for trainer Alban Elie Marie De Mieulle was joined by another stablemate TAYF (Amer x Djelmila), who had Soufiane Saadi in the saddle, up front. French Champion Jockey Maxime Guyon managed to find a gap between the two Umm Qarn horses and urged his mount forward and Ebraz pulled away easing to a victory with a length and three quarters to spare.

A spectacular run on the long home straight at Al Rayyan Park saw LADY PRINCESS (General x Nacree Al Maury) complete a hat-trick for the colours of Khalifa Bin Sheail Al Kuwari on Saturday. Cristophe Soumillon was in the saddle of the Thomas Fourcy-trained filly for the HH THE AMIR SILVER SWORD (Sponsored by Ooredoo) (4yo PA). After staying behind another Fourcy’s ward, Emporio, for the bulk of the race, Soumillon had his mount pick up the pace coming off the bend and then just kept pulling away for a spectacular victory in the USD 250,000 race.

Khalifa Bin Sheail Al Kuwari’s AL MALHOUF (Dutch Art x Lady Eclair) made a fantastic Qatar debut as the French raider put up a determined display in the HH THE AMIR SHALFA (85 & Above for 4yo & older Thoroughbreds). Helmed by Cristophe Soumillon for French trainer Fabrice Chappet, the 5yo stayed in the front half of the packed field before taking the advantage on the final stretch of the 2000m run and then holding on for a fine victory.

Khalifa Bin Sheail Al Kuwari’s SIR ARTHUR DAYNE (Sir Prancealot x Shoshoni Wind) showed promise on his Qatar debut earlier this month, finishing runner-up behind Think Big. On the big day on Saturday, under Oisin Murphy, the Gassim Mohammad Ghazali-saddled colt found a little more in him in the final 50m to top the AL BIDDAH MILE (QA Gr 2)  (3yo). On the rails on the home straight, the colt was neck and neck with the Tom Marquand-ridden THINK BIG (Night Of Thunder x Avenue Montaigne), saddled by Georges Mikhalides for Al Wasmiyah Farm, but took a slight advantage to win by half a length. Another Ghazali’s ward, PERFECT EMPIRE (Holy Roman Emperor x Pink Tequila), was third under Harry Bentley.

Abdulhadi Mana Al Hajri’s DARK PURSUIT (Pastoral Pursuits x Ogre) carried the momentum from his Sprint Trial victory earlier this month into the DUKHAN SPRINT (QA Gr 3) (Sponsored by Breeders’ Cup) (3yo & older Thoroughbreds) on Saturday. In the six-furlong sprint, Luca Maniezzi bided his time astride Stefano Ibido’s ward before giving his go ahead at an opportune time on the home straight. The 4yo gelding duly obliged and there was little that the competition could do to stop him from winning. The Oisin Murphy-ridden IZZTHATRIGHT (Moss Vale x Miss Adelaide) finished second while Ivan Rossi guided SHOBROM (Acclamation x Strasbourg Place) to third.

HH Sheikh Mohammed Bin Khalifa Al Thani’s METHGAL (TM Fred Texas x Theeba) found some late reserves on the home straight to ease through to a memorable victory in the QATAR INTERNATIONAL CUP (GR1 PA) (4yo & older). Coming off a handicap victory last month, the colt settled midfield under Maxime Guyon even as the Mickael Barzalona-ridden Khozan set the pace early on. Julien Auge had the Thomas Fourcy-trained Shalaa (Dahess x Dormadora) move up on the outside two furlongs out and take the advantage. However, the Julian Smart-trained Methgal too joined the leader and pulled away 100m out for a one length victory. Umm Qarn’s Marid (TM Fred Texas x Al Dahma) completed the top three under Olivier Peslier.