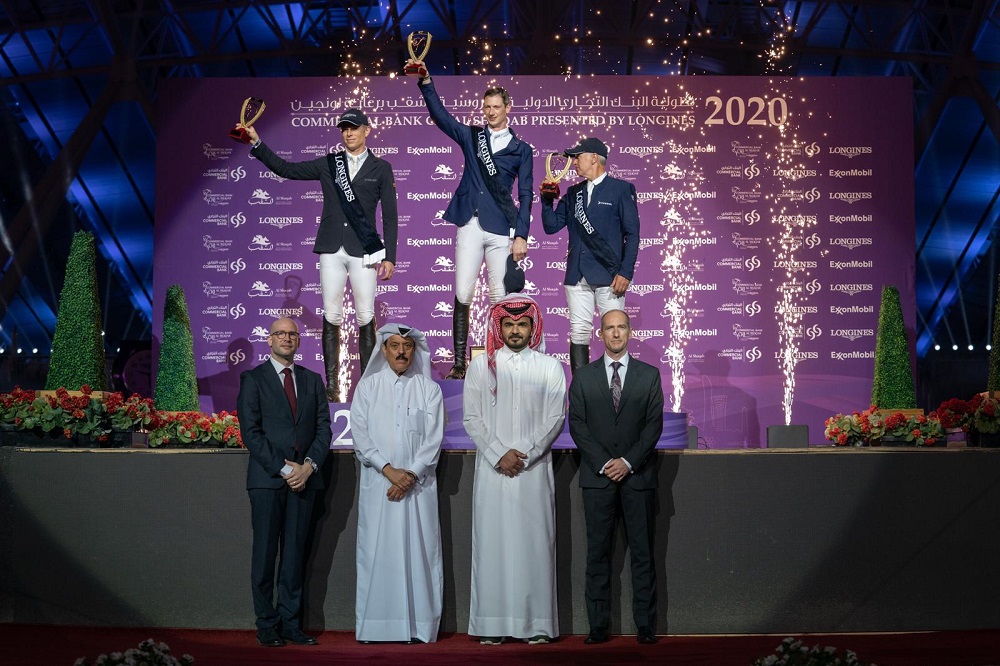 Deusser had a quiet weekend coming into the final day of the Commercial Bank CHI Al Shaqab Presented by Longines, but the German World No 3 rose to the occasion when it mattered. On the final night of the prestigious championship, Deusser saved his best for last as he clinched the Grand Prix 1.60m class at the Longines Arena at Al Shaqab yesterday.

“It feels great to have won this event. Killer Queen has long strides and she runs tight lines," Deusser said after getting richer by €135,300. “I had never won this Grand Prix. It was pretty tough today, but my horse did great. I'm really happy. This ring with long lines is very nice for her. She won with her big canter today," the 38-year-old added.

Eighteen combinations advanced to the second round of the quality 41-rider field, which was followed by a jump-off for the double clear combinations. Kuhner set the pace with his lightning bay Electric Blue P, while Bost had to balance Sangria du Coty just too often and was about 0.29 seconds slower than the Austrian.

Deusser remained neck-and-neck with Kuhner until halfway through the jump-off course, but flew past him on the final line with Killer Queen Vdm and finished half a second faster. Julien Epaillard – who had won thrice in the past two days – looked good to beat Deusser's time but the Frenchman got a bar on the second-to-last obstacle with Alibi de la Roque and had to settle for seventh spot.

“It's difficult to say what was the hardest in the final run. A lot of riders had gone fast. I had to do as fast as possible. My horse has a huge stride and having long lines helped. In smaller arenas, it was the biggest difficulty for me, but here, it was not as much a problem," Deusser said.

Omar al-Mannai, the Event Director of the Commercial Bank CHI Al Shaqab Presented by Longines, was pleased with the turnout for the championship and was looking forward to next weekend's Longines Global Champions Tour opener. “We spent three great days of high performance sport. We had fun around the venue at the festival area. The atmosphere was incredible. It was nice for everyone who came here. I hope everyone enjoyed their time. Lots of things to do for next weekend as well," al-Mannai said.

Earlier, Patrik Kittel made it two victories in a row with 14-year-old gelding Delaunay Old to win the Dressage CDI5* Grand Prix Freestyle, with the pair having also won on Friday.

Kittel and Delaunay Old scored 79.290 percent to top the field as the Swedish rider took home €27,173 in prize money. “I came here with the goal of being among the top three and we really succeeded. I'm really happy. You can't be more than happy when you win. I had a much better feeling today. Delaunay came more into the program and relaxed in a different way," said Kittel.

Morgan Barbançon and Sir Donnerhall II Old, France's leading combination, scored 76.450 percent to place second, as the duo did in the Grand Prix on Friday. Spain's Juan Matute Guimon and Quantico were third on 76.400 percent.

Meanwhile, Ireland's Kate Dwyer on Snowdon Faberge took the Grand Prix Special on a personal best score of 70.043 percent. Dwyer was in tears as the judges read out the score as she became the first Irish rider to win at Grand Prix Special at five-star level. Last to go in the six-horse class and riding her 14-year-old gelding Snowdon Faberge, Dwyer beat Belarus' Hann Karasiova into second place.

“I am a little bit in shock but so happy. I just felt today I really had him with me in that ride, he was taking me every step of the way. When I came up that last centre line I was like 'oh my goodness, this is what it feels like'. I am delighted with his performance and I know this is only the tip of the iceberg of what he can give me," a delighted Dwyer said.

Following a 10th place finish in Friday's Grand Prix, Dwyer said her aim was to break the 70 percent mark and was overjoyed to have done that. “I finally hit the 70 percent. There were tears in my eyes. It is so lovely to hear it, and it's not that often you hear it, so I am delighted and really proud. When I looked back and saw my mark I just couldn't stop the tears, I just couldn't believe it," Dwyer said.