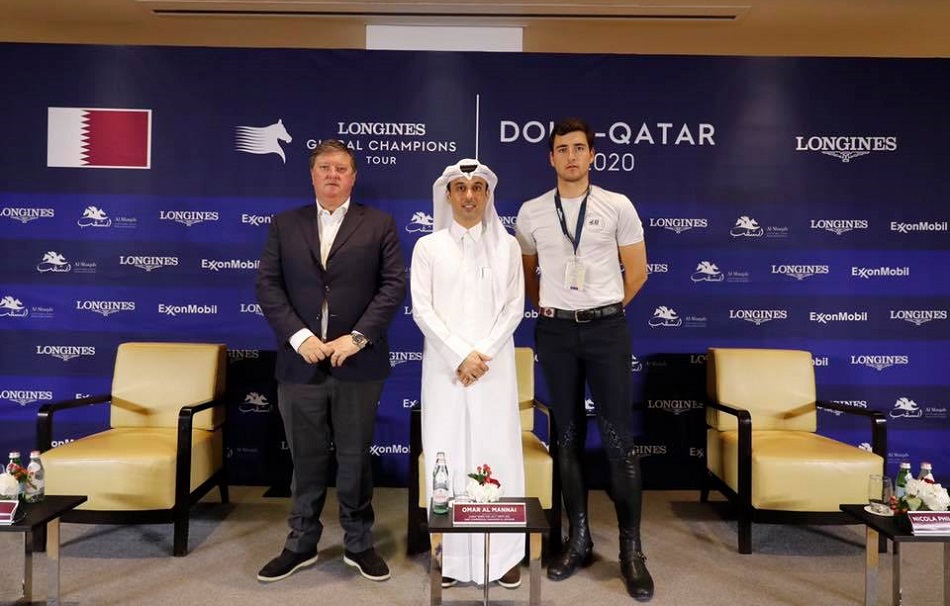 Doha, 4 March 2020 -  The 2020 Longines Global Champions Tour and GCL were officially declared open Tuesday  in Doha as top rider Nicola Philippaerts and local organisers hailed the 'amazing, prestigious' circuit and predicted an epic battle for the individual and team titles.

Al Shaqab is the launchpad for the new season with 50 riders from 15 different countries heading to Qatar's capital city from tomorrow till Saturday to take part in these high-stakes competitions under the stunning soaring architecture of the Longines Arena at Al Shaqab. The best riders in the world are in attendance, including 9 of the top 10 riders from the LGCT overall season ranking at the Finals in 2019, setting the scene for an electrifying weekend of sport.

Omar al-Mannai, Commercial Manager of AL Shaqab and Event Director, spoke of the importance of hosting this opening leg. “Longines Global Champions Tour started in Doha in 2008, then in 2013 we started hosting LGCT here in Al Shaqab. LGCT is a tour that takes place all over the world, and of course it has boosted the sport all around the world. For us here in Doha, it's incredible for riders, trainers, and so on to experience this kind of event. Besides that, the top sport of LGCT continues to attract new partners - local and international - to be part of this story here in Qatar and this is important for us as organisers and hosts. We now have almost 40,000 spectators attending over three days so we have really developed the event in that way too. We are looking forward to continue hosting this event in the future," al-Mannai said.

He also spoke of the objective to encourage a new generation in show jumping at the Kids' Academy at Al Shaqab, building on the sport's growing popularity in Qatar, and praised young riders who are inspired by watching and learning from the top riders in action at the event.

Philippaerts will be one to watch this season, and he brings some talented horses to the competition this weekend including Katanga, who placed fifth in the Grand Prix at last week's CHI event at Al Shaqab. The Belgian rider was impressed with the facilities for horses, riders, grooms, owners and spectators at Shaqab. “For us as riders it's an incredible place, we always look forward to coming back here. I think the best riders in the world have been coming already for many years here, the top 30 almost always come here. The weather is good, the facilities are perfect, all the riders come here with their best horses. The event and venue is good preparation for this year's Olympic Games as the weather and temperature is good for the horses' acclimatisation, and there is a lot of space to work everywhere," Philippaerts said.

LGCT and GCL President and Founder, Jan Tops spoke of the huge anticipation among fans around the world for the kick-off event of the season, and of the ever-increasing following that the tour has amassed.  “I think Al Shaqab is a unique place in the world, I don't think there is a second place like this, they really think of everything. The public attendance is increasing every year, which is very nice to see. The whole place is picture perfect. We are excited to see all the teams battle for their places for the title and also the riders to try and qualify all season for the LGCT Super Grand Prix in Prague which is very prestigious to win," Tops said.

The tour has grown from strength to strength since its inception in 2006, increasing from 6 events to this year's calendar of 18 events including the GC Prague Playoffs, spanning 3 continents and 18 iconic locations around the world. The first round of the GCL team competition will begin at 5:45pm tomorrow, with home team Doha Falcons looking for a good start. Friday will see two top-level competitions, before the second round of the GCL competition takes place at 2:45pm on Saturday. The LGCT Grand Prix of Doha kicks off at 6:15pm on Saturday, with riders vying for the win as well as the first golden ticket to the LGCT Super Grand Prix at the GC Prague Playoffs.