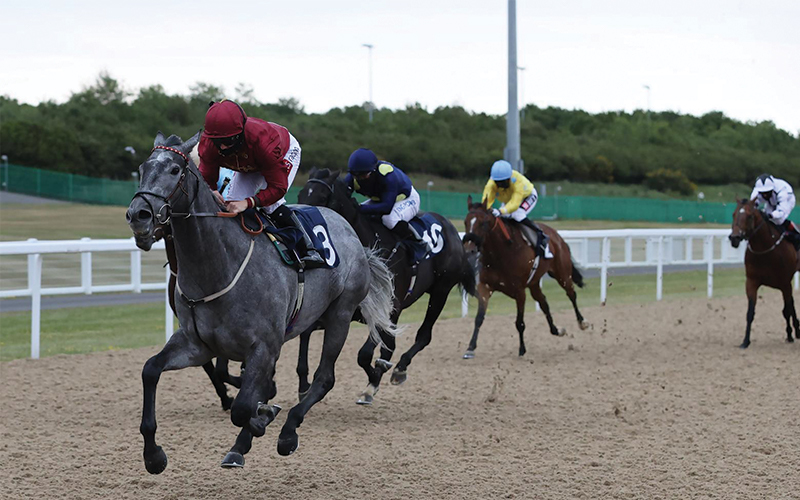 London, 3 June 2020 - On the second day of racing’s return in England, Qatar Racing’s MEDAL WINNER (FR) (Olympic Glory x Pax Mina) was a comfortable winner and doubled his tally in the Betway Heed Your Hunch Handicap at Newcastle, on Tuesday 2 June. Trained by the up-and-coming Archie Watson in Lambourn, the four-year-old grey gelding sat just behind the leaders in the 2000-meter race for four-year-old and older runners on the all-weather. Ridden by Hollie Doyle, they came into the middle of the track, and once in the straight, MEDAL WINNER pulled easily clear of his rivals. He was never threatened and he won by comfortable two lengths. The Roger Fell-trained and Callum Rodriguez-ridden COCKALORUM (IRE) and the Simon & Ed Crisford-trained and Silvestre De Sousa-ridden CAPE CAVALLI (IRE) had a dead-heat for the second place.

MEDAL WINNER is by Al Shaqab Racing’s sire Olympic Glory, who stands at Haras de Bouquetot. He ran just three times as a 3-year-old for one place and one win. This was his first run since July 2019. He was bred by Haras de Mandore and was bought by HE Sheikh Fahad Bin Abdullah Bin Khalifa Al Thani’s manager, David Redvers, at the Arqana Breeze Up Sale.