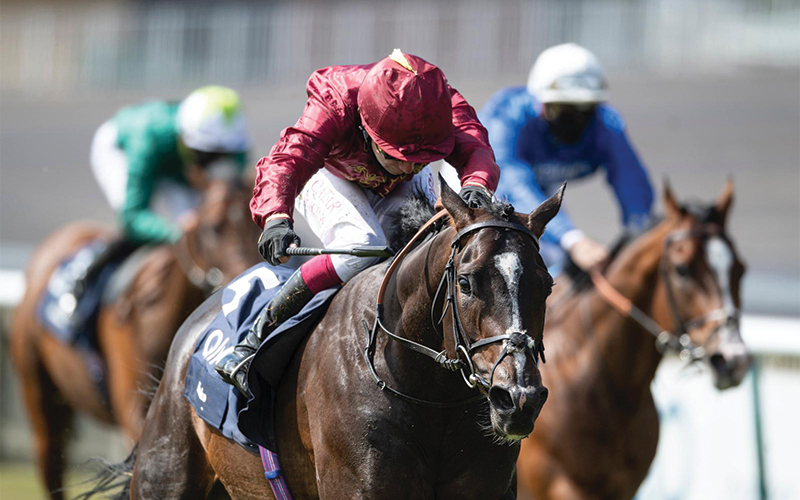 London, 7 June 2020 - The first British Classic of the year went to Qatar Racing Limited’s KAMEKO in a spectacular race on Newmarket’s Rowley Mile on 6 June, breaking the record time for this race – no small feat! Fifteen runners lined up for this historic challenge and the starting favourite was Pinatubo, last year’s 2-year-old champion. There was drama from the off in this race when KENZAI WARRIOR reared as the stalls opened, nearly losing his jockey. They raced in a single Group on the rail, with PERSUASION setting a smart pace. The second favourite, WICHITA, sat just off the leader, with PINATUBO and ARIZONA together behind. KAMEKO was perfectly placed behind these three horses. WICHITA came to take the lead at the 3-furlong pole and racing really got underway inside the two-furlong marker. Having to come around a failing ARIZONO into the centre of the track, KAMEKO showed a remarkable turn of foot to pass his rivals to win by a neck in front of WICHITA, with PINATUBO a further length behind in third. This was a first Classic success for jockey Oisin Murphy, and a first 2,000 Guineas win for trainer Andrew Balding and for Qatar Racing Limited.

Last year’s Group 1 Futurity Trophy winner, KAMEKO, had been described by Balding as the best horse to pass through his care and he certainly lived up to that description here. He is now favourite for the Epsom Derby, following today’s scintillating performance.

Jockey Oisin Murphy said after the race, “I don’t want to cry. My boss, Sheikh Fahad is at home in Newmarket and obviously with the current pandemic, he couldn’t be here. I started my career with Andrew Balding as trainer. To ride a Classic winner, my first one, in these colours – this horse’s father is Kitten’s Joy, the same as Roaring Lion – is incredible. It’s the stuff of dreams. It was a gutsy performance. He hardly blew a candle out afterwards – he must have a tremendous amount of ability.”

KAMEKO is by Kitten’s Joy, as was HE Sheikh Fahad Bin Abdullah Bin Khalifa Al Thani’s much-missed Champion ROARING LION. Both attractive grey colts, Roaring Lion also ran in the 2,000 Guineas for a sixth-place behind SAXON WARRIOR. Again, as with Roaring Lion, KAMEKO was bought as a yearling at the Keeneland September Yearling Sale. He is out of SWEETER STILL, a Group 3 winner who is a sister to KINGBARNS, a Group 1 winner at 2, in the Futurity Trophy.