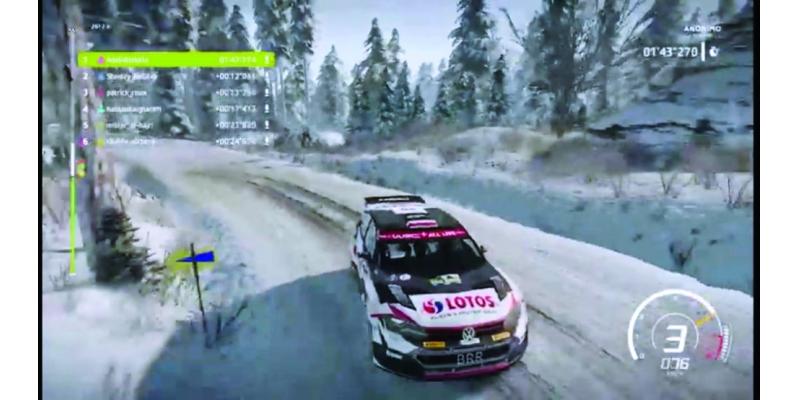 Doha, 9 June 2020 - Some of the car racing pros competing in the WRC 8 are relishing the digital challenge and expressed wish to have more such events in order to develop the online racing in the region.
The Qatar Motor and Motorcycle Federation-organised WRC 8 had its first qualifying race in Sweden on Sunday and pulsating fights for top positions marked the start of the online racing.
Qatar’s former FIA World Cup for Cross-Country Rallies T2 winner Adel Hussein Abdulla, MERC 2 regional champions Meshari Al Thefiri and his Qatari co-driver Nasser Saadoun Al Kuwari, Oman Rally champions Zakariya Al Aufi and his co-driver Ammar Al Balushi and Qatar Touring Car Championship M240 runner-up Hamad Al Sulaiti were all seen in the thick of the tough fights on the snowy course of the first race.
Barring the reigning MERC 2 winners Al Thefiri and Al Kuwari, who were a bit unfortunate to slip to fourth spots in their respective groups, others displayed good set of skills and placed themselves firmly on the course of getting a spot in the Week 2 (semi-finals) of the championship.
Al Thefiri said he had some connectivity issues with the server but it was overall a big fun to compete against some strong online performers. “It was a fantastic rally for us. I want to thank the QMMF for this event. They did well to choose this time as all sporting activities have been stopped by the coronavirus pandemic. People are not able go out and compete. So the online events are getting a big boost now.
“The level of other participants is very high. Drivers of many other countries are also competing. Some of them don’t know the rallies. They just know about karting, circuit racing and drifting but they are doing well. It’s good to have a new sport and I’m happy to enter this championship,” the Kuwaiti said.
Talking about his Sweden Rally performance, he said, “I had some problems with the server. Also I didn’t drive well. I had played these stage before and got a good time but I could not repeat it. Though I’ve a big experience of online dirt rallies, I’m contesting due to my friend (Mohamad Al Thefiri), this is my first online WRC 8,” Al Thefiri added. Hamad Al Sulaiti savoured his scrap with Al Aufi in the maiden online rally. “The stages were held on snowy surface in the Sweden Rally. It was my first experience of driving on snow. I enjoyed my competition with Zakariya until the last stage. I expect the next rally will be more difficult but I’m positive about getting good results again.”
Before the start of the WRC 8, Adel Hussein Abdulla said he was expecting tough time from other drivers. “This is going to be a tough event but am happy about getting new experience. There are some strong digital racers and I feel it will be a very thrilling competition to find a spot in the second week.”
QMMF Executive Director Amro Al Hamad summed up the first round by saying: “The display by the drivers in the first qualifying round - the Sweden Rally - has exceeded our expectations. The battles in the groups for top positions have been thrilling. The opening round really generated a lot of excitement and we hope to have more thrills in the next races.”