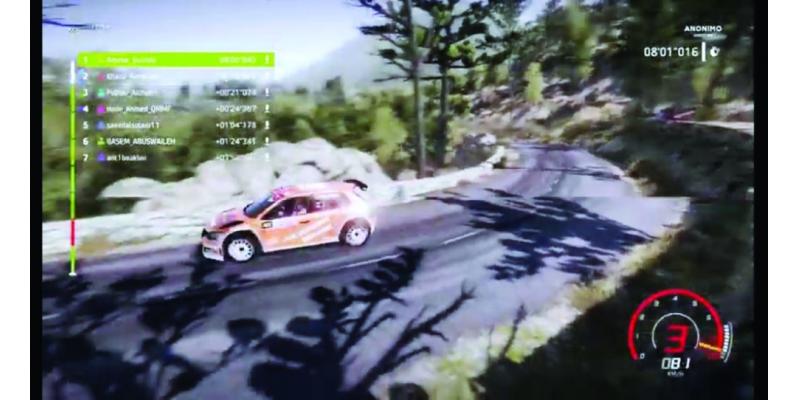 Doha, 11 June 2020 - Ammar Al Balushi capped a superb day for Oman when he claimed seven out of eight stages to top the Group D in the Rally of France, the second qualifying event of the WRC 8.

On Tuesday after Zakariya Al Aufi, the Omani rally champion, clinched the victory and shared the top spot with Hamad Al Sulaiti in Group C, his co-driver Al Balushi produced blistering pace to bag the win, beating second-placed Khalid Al Maraghi by over one minute.

Both Al Balushi, an established SIM dirt rally driver, and Al Maraghi shared the opening two stages. But the Omani rebounded from his second-place in the second stage to reel off six stages in a row to collect another 40 points. He now leads the pool with 80 points and is ahead of Al Maraghi by eight points.

In the third spot is Meshari Al Thefiri, the Middle East Rally Championship 2 winner from Kuwait, who vastly improved his performance and his six podium finishes, including two runner-up spots, took him past closest challenger Hade Patel. Saeed Al Sulaiti, the three-time QSTK600 winner and QORC Moto champion, began well to get a third place but in the rest of the stages, he could not get better than the fifth spot. Basem Abu Swaileh and Antoine Baaklini were sixth and seventh.

Al Balushi, who set a hot pace and won the opening stage by over 13 seconds ahead of Al Thefiri, went out of the track to suffer a nine-second penalty in the second stage. Al Maraghi exploited the situation and went on the register his victory by three seconds. After this, Al Balushi attacked vigorously in all the remaining six stages and sealed his class.
After the rally, the Omani expressed his delight for finishing on the top again. “I’m glad about my performance in the French rally. My plan was to win all the stages and finish first. In the second stage, I was leading by more than five seconds but unfortunately I drifted out of the road in the last five metres of the stage and got a penalty of nine seconds. As a result, I dropped to the second.
“The most important thing this week is to secure a place in the top three in the group and advance to the second week. The battle between the top five was close in each stage. Also I’m surprised by the level of other competitors in the French rally stages,” the Omani added.

Al Maraghi commented that he was satisfied with his display and maintained his hold on the second spot. He leads Al Thefiri and Patel by eight points. “The race was great. I’m happy to maintain the second place, especially against the pro drivers. In the first stage, I was moving at a good pace. I made a small mistake that pushed me down to the fifth place. Also in the seventh stage, I had the same problem.

However, in the rest of stages, I tried to maintain my full concentration to avoid any errors.
“I really enjoyed competing with Ammar. He is a really fast driver and I hope to enjoy racing against him in the next race again. At the end, I achieved my required place and will try to do well in the third rally on Thursday,” Al Maraghi added.

On Thursday, the third and last qualifying rally is scheduled in Argentina. As far as other groups are concerned, Adel Hussein Abdulla (80 points), Misfer Al Hajri (69 points) and Patrick Roux (64 points) look on the course to getting a spot in the second week from Pool A. From Group B, Mansour Dbeissy and Ahmed El Khouly, both have 76 points each, should be able to settle for the top two spots. Nasser Saadoun Al Kuwari (64 points) and Fadhalah Al Sulaiti (61 points) should challenge for the third and last spot.

In Group C, Zakariya Al Aufi and Hamad Al Sulaiti are fighting for the top slot as they have 76 points apiece. Ahmed Al Kuwari and Khalid Saadon are locked at 63 each. Barring a big upset, three out of these four should advance to the second round.French Rally results