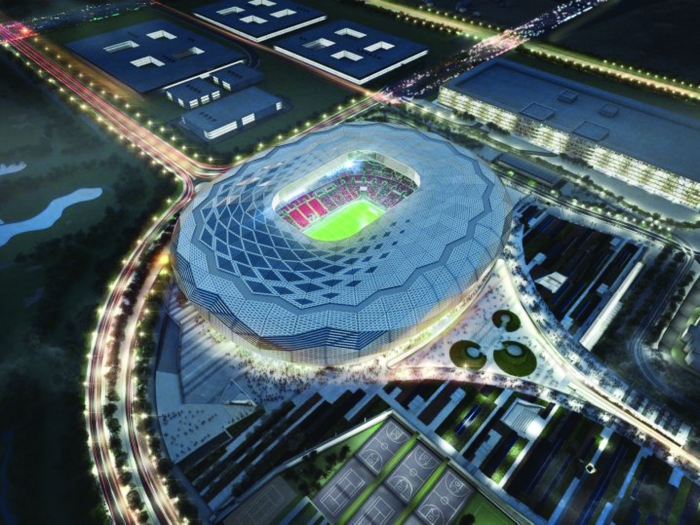 Doha, 12 June 2020 - The Supreme Committee for Delivery & Legacy (SC) organised an online media meeting on the unveiling of the third FIFA World Cup 2022 Education City Stadium with the participation of former Qatar national football team player Mubarak Mustafa Al Senyari (who famously carried Qatar to 1992 Gulf Cup win and who is now a sports analyst for Al Kass television) and Qatari journalist Mohammed Saadoun Al Kuwari.
The grand opening of Education City Stadium will be marked by the hosting of the QNB Stars League match between Qatar Sports Club and Al Rayyan on July 24. It will also mark the resumption of the league (Round 18) following a break since mid-March due to the coronavirus pandemic.
The Education City Stadium will play host to the remaining five rounds of QNB Stars League along with two other stadiums – Jassim Bin Hamad Stadium and Al Janoub Stadium.
Al Senyari, populary referred to as Mustafa and who was also an integral part of the Al Arabi side that finished as runners-up at the Asian Club Championships in 1994, is one of the ambassadors for World Cup Qatar 2022.
He stressed that the current generation of players are lucky since they have great facilities available to them. “It will push them to provide their best, especially as Qatar possesses all elements of success, including distinct infrastructure and advanced stadiums,” he said.
The former Al Annabi star stressed that Qatar are on the right path towards hosting the most important football international event of all time – FIFA World Cup Qatar 2022, especially since they are doing their best for the success of this global spectacle. Work is going on perfectly and a good example of the same which also shows the readiness is the unveiling of the third World Cup stadium. It reflects Qatar’s commitment to completing all things before their set times and fulfilling the promise in a timely fashion for the 2022 edition and it is exceptional.
He opined, “Al Annabi players are required to be ready ideally by the start of the tournament. Things at the World Cup, however, would totally different than the Asian Cup they won in 2019 given the presence of big teams. But I’m sure that the players would do their best to defend and honour Qatari football.”
On his part, Qatari journalist Mohammed Saadoun Al Kuwari, SC Ambassador, expressed happiness at being chosen as an honourary ambassador for the tournament adding that he has learned many new things by participating in various training courses, field work and in contact with many stars and ambassadors.
Al Kuwari said that the timing of the inauguration of the third World Cup 2022 Stadium in Education City is quite natural because Qatar has confirmed on many occasions its complete readiness to host the World Cup and the first proof was the inauguration of the first tournament stadium – the refurbished Khalifa International Stadium which was ready almost five years before the launch of the forthcoming World Cup in 2022.
Al Habsi, Gomaa welcome extravaganza to Arab world
Meanwhile, SC ambassadors Oman’s national team goalkeeper Ali Al Habsi and former Egyptian star Wael Gomaa said they were looking forward to the arrival of the event in the Arab world.
Al Habsi said Qatar’s hosting of the World Cup would open the door for Arab countries to host other editions. Following the success of FIFA World Cup Qatar 2022, the opportunity will be easier for Arab countries to play in future.
Gomaa said the progress being made by Qatar towards 2022 is admirable and he feels proud each time he compares it what he saw previously. “The whole world is looking at the upcoming stadiums and the preparations at all levels, but Qatar is looking for the comfort of football fans and not just the matches,” he stressed.
Gomaa said that he was wondering how Qatar would deal with heat and crowd and when he saw the excellent equipment and organisation he is now optimistic that 2022 World Cup would be an amazing edition..
As for playing league matches at the Education City Stadium, the third World Cup stadium, Gomaa felt it is a good test for the pitch and for the World Cup organisers. It’s a good step and a test for everything at the stadium much ahead of the 2022
tournament.