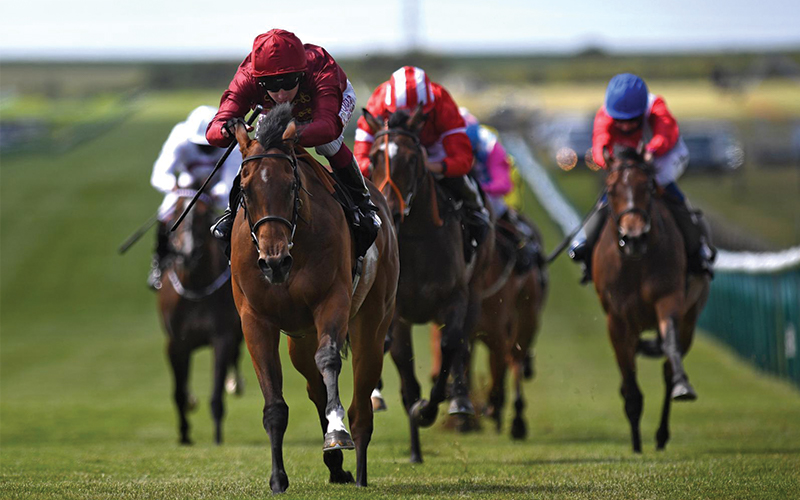 London, 29 June 2020 - In the colours of Qatar Racing Limited, TIME SCALE (GB) (Charm Spirit x An Ghalanta) lined up in the Listed Empress Fillies’ Stakes at Newmarket as 6/4 favourite on Sunday, 28 June, following her impressive six-length victory at Chepstow a fortnight ago on her second career start. The Ralph Beckett-trained bay filly dazzled again this afternoon at Newmarket. Once the start signal was given, she was smartly away to sit upon the pace in the six-furlong straight run for two-year-olds on Newmarket’s Rowley Mile. Travelling strongly throughout under Oisin Murphy, TIME SCALE began to pull clear of her rivals inside the final two furlongs. With a professional attitude and an impressive acceleration, she won in a dominant display by 3 ¾ lengths in front of CONCESSIONS (GB) (Muhaarar x Front House), who finished second for trainer Richard Hannon and jockey Ryan Moore. The Cheveley Park Stud-owned and Roger Varian-trained UNDERTAKE (GB) (Kodiac x Volition) was further 2½ lengths behind in third under David Egan.

By young stallion CHARM SPIRIT, who stands under the Qatar Racing Limited banner at Tweenhills Stud, TIME SCALE is out of AN GHALANTA, who was Group placed for trainer and breeder Jim Bolger. AN GHALANTA was bought by Qatar Racing Limited at the Goffs November Sale in 2012. She is the dam of BLETCHLEY, who was second in the Group 2 Nassau Stakes at Woodbine, Canada.