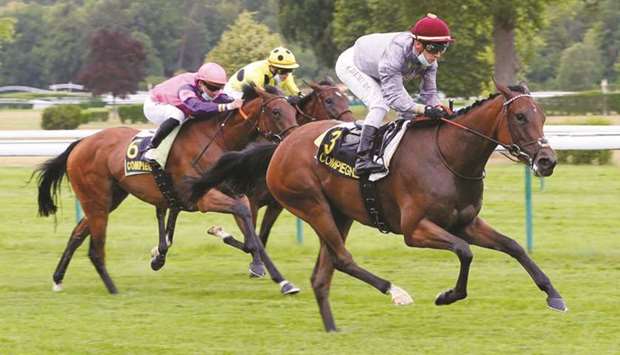 Doha, 2 July 2020 - Al Shaqab Racing’s homebred Chorba was the favourite coming into the Prix des Bains Pompeins, a Class 1 for three-year-olds over 2,000m, at Compiegne, France, yesterday. And she proved she was the best.
The Jean Claude Rouget-trained bay filly settled well in mid-division under Cristian Demuro. She was relaxed and easy in her action.
The runners chose to stay in the middle of the track for the better ground, and Camogie set a steady pace under Alexis Badel.
On the final turn, Chorba came around the wide outside while the rest of the field drifted onto the rail. A decision that paid off for Demuro, as Chorba ran strongly to the line, picking off her rivals, for a comfortable victory by a length and three quarters to double her tally.
Stella Thayer-owned and trained Control Tower was the runner-up under Stephane Pasquier. Camogie came in third. Henri Francois Devin-trained Camogie was a further neck behind in third.
Chorba, who was a winner on her only start as a two-year-old, is by Al Shaqab sire Olympic Glory, who stands at Haras de Bouquetot in France. She is out of the unraced mare Ysandre, a sister to Keltos.