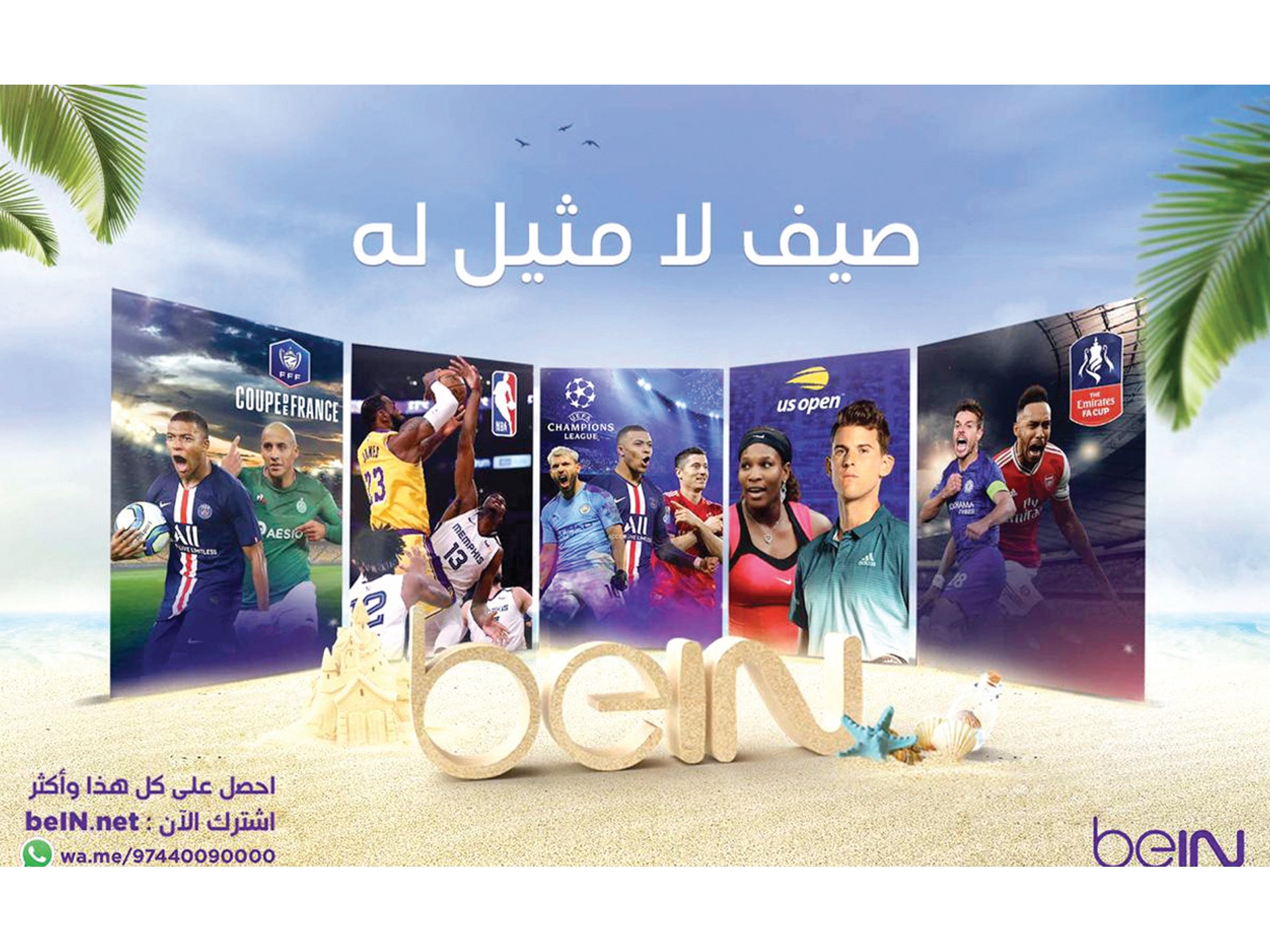 Doha, 23 July 2020 - As fans await the final matches of the English Premier League and Serie A – beIN SPORTS, the global sports channel, continues to host exhilarating live sport for viewers to enjoy exclusively across the Middle East and North Africa (MENA) – with the Coupe de France final, FA Cup final, UEFA Champions League, NBA and US Open all set to be broadcasted live throughout this summer.
On Friday, 24 July, French giants Paris Saint Germain will face Saint-Etienne in the Coupe de France final at 22:00 Mecca Time (GMT +3) live and exclusively on beIN SPORTS.
The FA Cup final, known as the oldest national football competition in the world, is set to take place on Saturday 1 August at 20:00 Mecca Time (GMT +3) with special coverage and dedicated studios.
The UEFA Champions League will also resume on Friday 7 August with the round of 16 second leg.
Also, on Friday 31 July, the National Basketball Association (NBA) will resume with the Los Angeles Lakers facing their rivals the Los Angeles Clippers.
On Monday 31 August, the United States Open Tennis Championship (US Open) kicks off featuring the best tennis players in the world.
Coupe De France Final
In the 103rd season of the Coupe de France, French powerhouse Paris Saint Germain meets Saint-Etienne in the final this Friday 24 July. The French champions, led by Kylian Mbappe and Neymar, will want to add another trophy to their name as they look to gain confidence before the UEFA Champions League resumes.
NBA
The restart of the National Basketball Association is set for Monday 31 July with 5 games set to be played on that day. beIN SPORTS will be broadcasting all the games live and exclusively to its viewers and fans across MENA as well as on the dedicated NBA channel.
FA Cup Final
The 139th FA Cup final will take place on Saturday 1 August at the famous Wembley stadium as London rivals Arsenal and Chelsea go head to head for a chance to win the coveted trophy. Both Mikel Arteta and Frank Lampard will also want to lift their first trophy in their managerial careers. Arsenal head to their 21st FA Cup final having won a record 13. Chelsea head into their 14th FA Cup final having won 8.
UEFA Champions League
In a completely new format unlikely to ever be replicated, viewers and fans will get to see the best teams in Europe competing against each other over 90 minutes in just over two weeks of football (7 August to 23 August).
A total of 11 thrilling matches will be played in just 16 days – with the quarter-finals, semi-finals and final all played in Portugal and in single-leg fixtures.
Four matches remain in the round of 16 second leg of the UEFA Champions League.
US Open
The US Open, known as one of the oldest tennis championships in the world, is set to kick of on Monday 31 August and will run until Sunday 13 September.
The worlds most famous tennis players will be competing against each other in one of the toughest tennis tournaments.
beIN SPORTS’ studio coverage for all the world class competitions will be across beIN SPORTS’ channels in English, Arabic and French; as well as beIN SPORTS’ 4K channel – providing viewers with incredible trilingual coverage.
beIN guests and talent will include Egyptian legends Mohamed Aboutrika and Wael Gomaa; Algerian expert Lakhdar Berriche; Tunisian football legend Tariq Dhiab; former Moroccan football star Yousef Chippo; and many others.
Commenting on an exciting summer of sports on beIN SPORTS, Jonathan Whitehead, Head of Sports for beIN MENA, said: “This summer on beIN SPORTS is definitely one of the most exciting yet. beIN SPORTS will be showcasing some fantastic finals and world class tournaments to viewers across MENA. Our world class content will provide our viewers and subscribers with fascinating coverage including dedicated studios and beIN guests and legends from across the region and world.”
Our UEFA Champions League coverage will also include commentary in English, Arabic and French as well as games on our state-of-the-art beIN 4K channel, so that you can see the best teams and biggest players in the highest quality.”