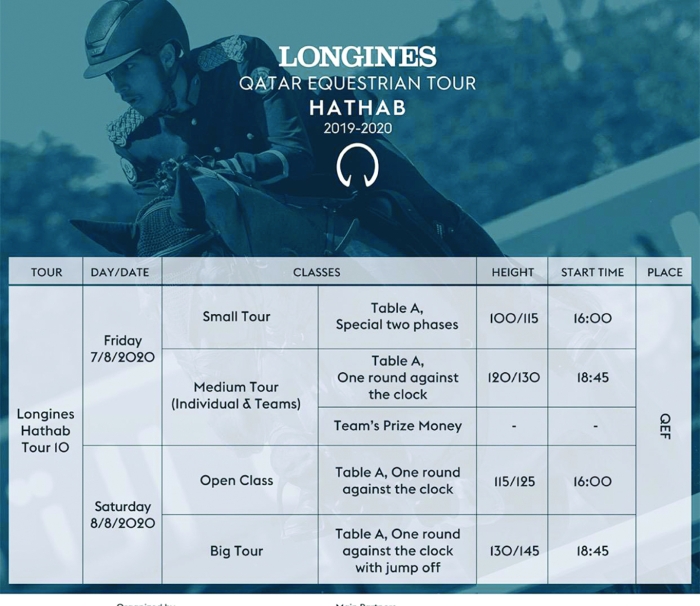 Doha, 6 August 2020 - The tenth round of the twelve-leg Longines Qatar Equestrian Tour Hathab 2019-2020 will resume at the Qatar Equestrian Federation on Friday (August 7) after the season was halted in March due to the spread of novel coronavirus (COVID-19) pandemic.
The resumption with the two-day tenth round on Friday and Saturday will be behind closed doors and within the framework of the plan to gradually lift the restrictions imposed in line with the Qatar Olympic Committee’s plan to continue all sporting activities according to the precautionary measures established by Qatar.
On Wednesday, a meeting headed by Ali al Rumaihi, Director, Longines Qatar Equestrian Tour Hathab, and also former Olympian, was held along with the other officials to discuss the procedures to be followed for smooth conduct of the championship inkeeping with all the safety protocols.
The opening day of the tenth round will begin with the Small Tour events at 4pm and will be followed by the Medium Tour (individual and teams’ events) at 6.45pm.
The second and final day of the tenth round (Saturday) will have the Open Class action from 4pm followed by the Big Tour action from 6.45pm.
The mandatory veterinary checks will be conducted
on Thursday.
The third season of the annual leg Longines Qatar Equestrian Tour Hathab had begun in October 2019 and was scheduled to conclude in April this year but has been extended to due to the forced break due to the coronavirus spread.
The eleventh round will now be held on August 14 and 15, while the season will close with the twelfth round from 27 to 29 August. All the three rounds will be held at the Qatar Equestrian Federation and will only include showjumping competitions for individuals and teams. The remaining competitions for Dressage and Future Riders shall not be held given the young ages of competitors.
All events will be held behind closed doors and audiences would be able to follow the action live on sports television channels.
The Hathab series launched in 2017 carries a total prize of QR1.5mn and is an initiative of HE Sheikh Joaan bin Hamad Al Thani, President, Qatar Olympic Committee.
Hathab meaning ‘Canter’ in Arabic, the annual championship aims at improving the standard of horse riding among Qatari youths while encouraging the involvement of private stables and individual horse owners to grow awareness of horsemanship as part of Qatar’s history and tradition.
The vision for Hathab is to inspire Qatar’s next generation of international champions.
Longines, ExxonMobil and Salam World are the official partners of this tournament and it is open to all Qataris and residents of Qatar who wish to participate.
Salman Al Emadi leads Big Tour
Salman Mohammed Al Emadi currently leads the Big Tour points tally having garnered 172 points from his participation in seven of the total nine rounds held till now. He didn’t showjump in the first two legs.
Nasser Al Ghazali (166 points) is following him in the second place while Mohammed Sultan Al Suwaidi with 164 points occupies the third spot.
The best seven out of the twelve rounds are taken into consideration by the judges to decide the overall national champions.
The Medium Tour is led by Ghanim Nasser Al Qadi (178 pts) and he is closely followed by Mohammed Khalifa Al Baker (177), and Mohammad Hazim Abara (174).
In the Small Tour, Mohammed Nasser Al Qadi (170 pts) leads ahead of Khalifa Abdulla Al Khaldi (168), and Mohammed Al Ghazali (166).
Among the teams, the Top Team (194) occupies the first position ahead of ExxonMobil team (180), and Lusail (175).
With the championship having entered the final stage, keen competition is in store ahead with the riders eager to put up their best showjumping skills.