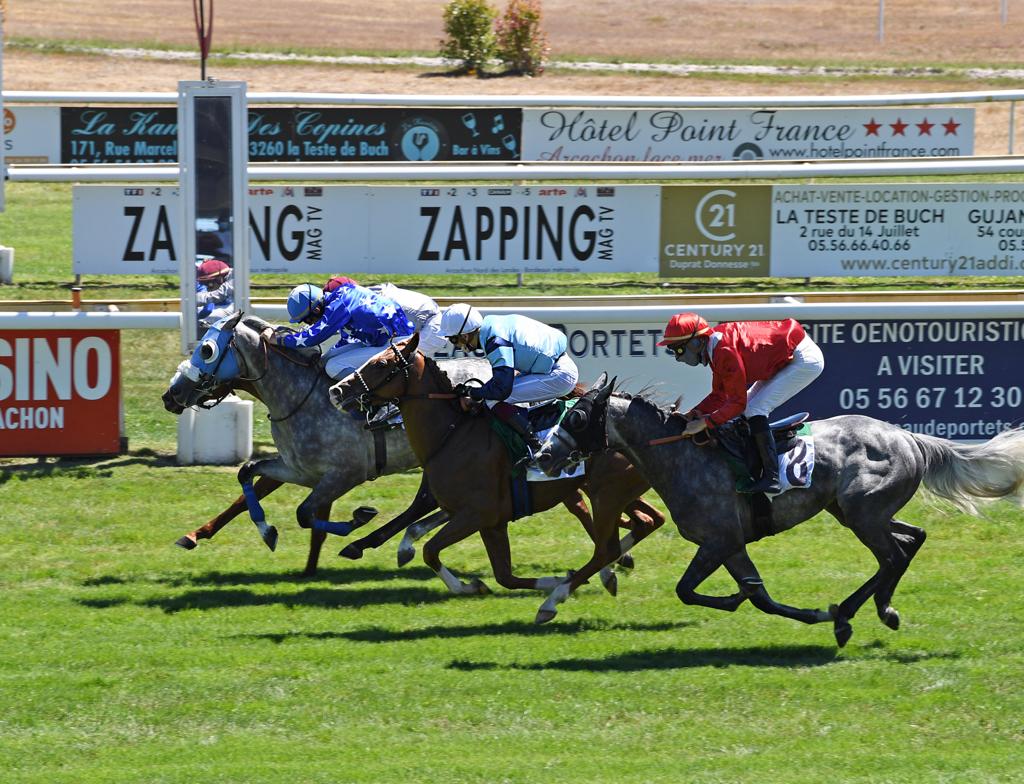 Paris, 6 August 2020 - HH Sheikh Mohammed bin Khalifa Al Thani’s four-year-old Purebred Arabian Kabeer (Mared Al Sahra) landed his first victory by a nose in the Prix Arca – Wathba Stallions Cup (maiden) at La Teste-de-Buch in France on Wednesday. This race was his seasonal comeback and also his first attempt over a mile. The last time out, in September, the Julian Smart-trained colt had finished third over 10 furlongs.
Miss Boum Al Maury (Boum de Ghazal) led the race with a very steady pace while Kabeer, ridden by Clement Cadel, sat in fourth position.
Wearing blinkers, he showed a nice turn of foot in the straight. He had to battle with Nayar Athbah (AF Albahar) and Zalej Al Cham (Azadi) before taking the lead. The Al Shaqab Racing-owned colt Zalej Al Cham finished in second.
Bred by Al Shahania Stud, Kabeer is the brother of Nimr Asf (Amer) winner of The Heir Apparent Sword, Mkeefa (Amer) winner of three Gr1s (PA) including the Qatar Arabian World Cup and Chaddad (Mared Al Sahra) winner of the Qatar Arabian Trophy des Poulains (Gr1 PA). His sire Mared Al Sahra (Amer) is standing for HH Sheikh Mohammed bin Khalifa Al Thani.
King Shalaa, a new
2YO winner
King Shalaa (Shalaa x Baki) made a thunderous debut in the Prix du Chateau de Portets (maiden), racing against horses who had already racing experience at La Teste, France, on Wednesday.
A little keen at first, the colt, who is owned by HH Sheikh Abdullah bin Khalifa Al Thani, gradually relaxed towards the rear. Entering the straight, the future winner did not have an easy passage. Jockey Olivier Peslier had to send him into middle of the track to get the opening and once he found a gap, the colt stormed to the lead.
King Shalaa won by one and a half lengths ahead of Normandy Beech (Le Havre), who was having his third outing. He snatched second, by a neck just on the line, from Trust On Him (Elvstroem).
After the race, François Rohaut, King Shalaa’s trainer and breeder, commented: “He’s a colt that we have always really liked since the day he arrived. In the morning, he shows us the same talent as he did here and, although he is very green, this race was intended to give him a good education. He pulled a little at the start and then struggled to find his way in the straight, but it’s a great lesson and it confirms what we think of him. We’re not going to be in a hurry this year because he’s still a big baby. I would like to thank HH Sheikh Abdullah bin Khalifa Al Thani who trusted me when I told him that I had a very nice foal to sell. He is also one of the first winners of Shalaa (Invincible Spirit), who I really like.”
Bred by his trainer, King Shalaa is now the fifth winner of the young Al Shaqab Racing sire Shalaa, who stands at Haras du Bouquetot. His dam Baki (Turtle Bowl) won two races in Vichy over 2,000m and in Deauville over 2,500m. Besides King Shalaa, she is also the dam of Waltham (Wootton Basset), winner of three races including the Prix Maurice Caillault (L).