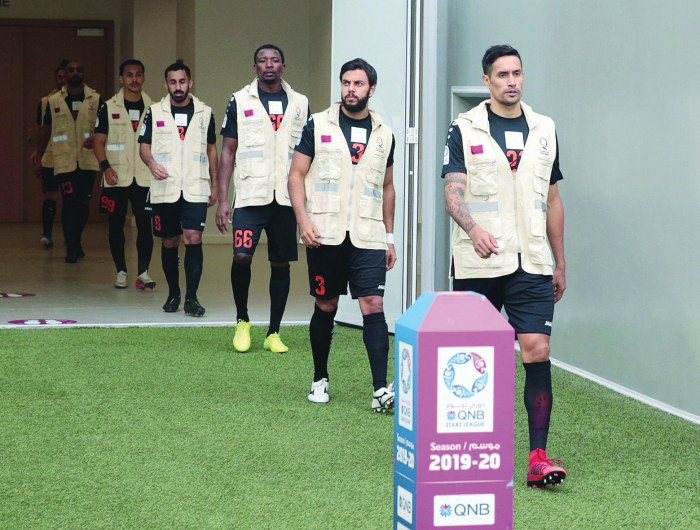 Doha, 13 August 2020 - Umm Salal Sports Club players wore the jackets of Qatar Charity during going down to the Al Janoub Stadium, before facing the Al Ahli Club team in the 20th round of the QNB Stars League held last week.
The initiative was to endorse Qatar Charity’s continuous efforts in fighting the battle against the coronavirus (COVID-19) pandemic.
Qatar Charity thanked the management of the Umm Salal Club for showing this generous gesture that appreciates the humanitarian efforts made by Qatar Charity, and its workers and supporters against the pandemic.
“This initiative comes within the framework of our social responsibility and in appreciation of the great efforts made by Qatar Charity to curb the outbreak of the coronavirus within and outside the State of Qatar,” said Abdullah Mazhan Al Shammari, the media official for Umm Salal Club.
On his part, Captain Ali Amin, Sports Director of Umm Salal Sports Club, applauded the humanitarian, charitable, and developmental role of Qatar Charity worldwide, noting the link between charity works and sports. He also indicated that this initiative is the beginning of cooperation between the club and Qatar Charity, hoping for further collaborations in the future.
Since the beginning of the coronavirus, Qatar Charity has distributed health and awareness bags, food baskets and other items to the workers and health awareness volunteers, in cooperation with the concerned authorities in the country.
Besides, Qatar Charity has provided emergency aid to many countries affected by the coronavirus. It has also signed several cooperation agreements with UN agencies such as UNICEF, UNHCR, and OCHA, to maximize the number of beneficiaries hit by the pandemic.