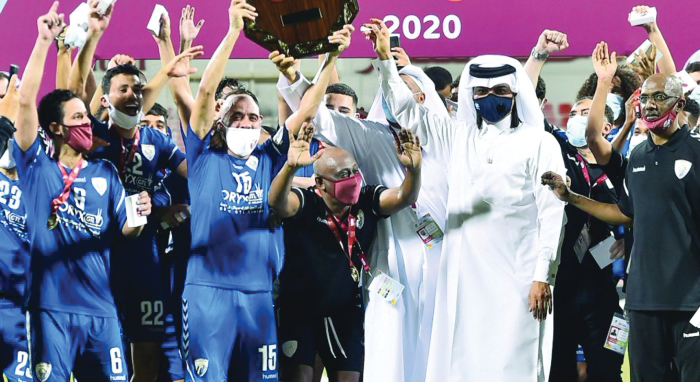 Doha, 25 August 2020 - Al Kharaitiyat were officially crowned Second Division’s champions after sharing a 1-1 draw with Muaither at the Grand Hamad Stadium.
Ayoub Widrasi opened the score for Muaither against the run of play on 16 minutes, while Rashid Teberkenin maintained his blazing hot form by equalising for the champions just five minutes inside the second half.
The result propelled Al Kharaitiyat’s tally to 37 points, meanwhile Muaither finished their season with 25 points in fifth place.
Al Kharaitiyat were demoted to the Second Division last season following a lengthy stint at the top flight, but the club dominated this season from the early stages and secured the promotion with three rounds to spare.
Meanwhile, at the Suhaim bin Hamad Stadium, Al Markhiya got the better of Mesaimeer 3-2 in a keenly contested match which secured them second place and the chance to return to the QNB Stars League.
Al Markhiya are now poised to face Al Khor in a one match promotion playoff scheduled for Friday, 28 August.
The Qatar Football Association (QFA) regulations stipulate that the club coming in last position in First Division will join the Second Division, while the club ranked 11th in the First Division will play against the club ranked second in Second Division.