Xavi aiming for a good start against Al Kharaitiyat 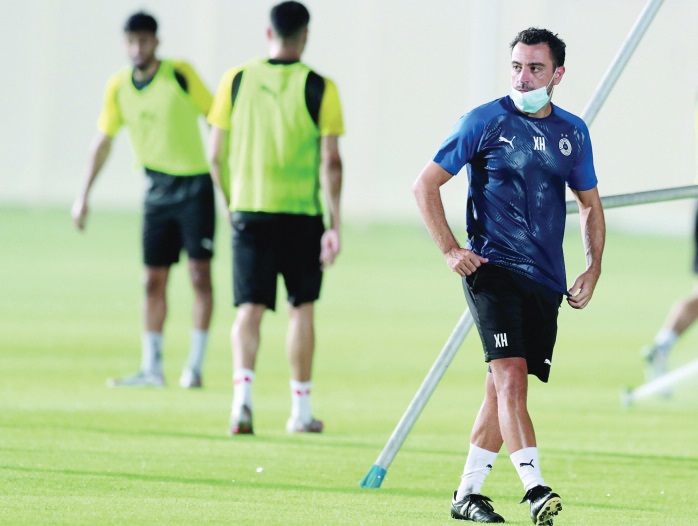 Doha, 3 September 2020 - Less than two weeks after Al Duhail claimed the QNB Stars League title for the 2019/20 season, the league returns again as the 2020/21 season kicks off on Thursday.

Due to COVID-19 health protocols, three stadiums will be used for the start of the season; the 2022 World Cup Stadium Education City, Al Gharafa, and Al Ahli Stadiums.

The Wolves would be seeking to reclaim the Falcon Shield after a lacklustre season, which saw them lose five matches in Xavi Hernandez’s first year as coach. However, a summer of reimbursements with Santi Cazorla and Guilherme Torres should boost the Wolves’ midfield, especially after injuries to Salem al Hajri and Hassan al Haydos last season left the squad stretched thin in creativity.

Xavi will also expect Baghdad Bounedjah to overcome his difficulties in front of goal in the QSL and the AFC Champions League.

Ahead of the season opener, though, Xavi hailed the recent arrivals but quickly stressed that Al Kharaitiyat will pose a difficult challenge.

“We want to start well, but as I insisted since last season, the QSL has improved a lot, so every game will be tough to win. We are ready to compete, and we want to start well. In front of Al Kharaitiyat, we have a new team in the competition, but we faced them in the quarterfinals of the Amir Cup last season, and it was challenging because they have outstanding foreigner players. They are a good team, they really work well and have a good coach – Yousuf Adam; I respect him a lot. When we faced his teams, it was tough,” the Spaniard said.

Al Kharaitiyat coach Yousef Adam knows his side face a challenging task against their much-fancied opponents but is optimistic of their chances.

“This match will not be easy because Al Sadd is a big team having distinguished players and we respect them just as we respect all teams we play against. We have studied them well; they have their strengths and weaknesses like any other team.

“Our ambition in the new season is to get stabilised first and gradually develop in the following seasons. We seek to satisfy everyone in terms of level and positive results,” Adam said.

Also on Thursday, Al Rayyan and Al Sailiya will lock horns at the Al Gharafa Stadium. Al Rayyan’s target will be winning the league at all cost after coming close last season only to lose out on the last day.

Coach Diego Aguirre said his side can repeat last season’s form and even better.

“I am confident that Al Rayyan are able to repeat what we did last season. It is very important for us to start strongly and win the first match. If you remember, we drew our first three matches last season and wasted early points. We do not want that this time around and I trust my players,” said Aguirre.