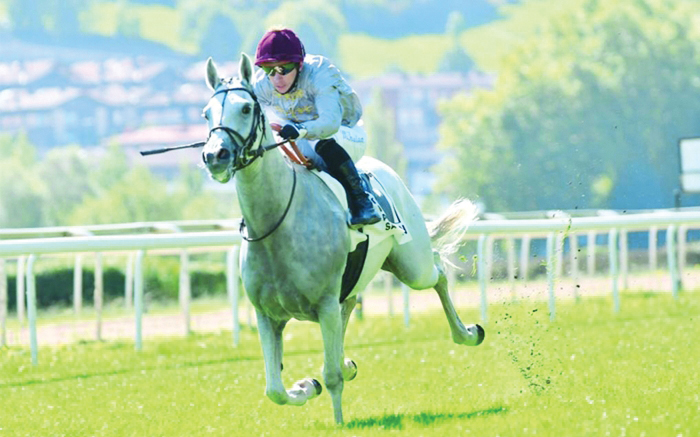 Madrid, 3 September 2020 - Shadad (TM Fred Texas x Nasrat) added a new Stakes race to his record when giving a fine demonstration on the Premio Sheikh Zayed Bin Sultan Al Nahyan Cup at San Sebastian in Spain on Wednesday.
The Al Shaqab Racing’s homebred gelding is trained by Charles Gourdain and was already a Group winner last year as a three-year-old.
With Maxime Foulon in the saddle, the grey sat prominently in this five-runner race and, in the straight, pulled clear of his rivals. Despite drifting off his line into the centre of the track, he secured an easy one and a quarter-length victory.
Al Shaqab Racing & Nada Moussali-owned Zalej Al Cham (FR) (Azadi x Al Kahira) was the runners up, securing a one-two for the silver and maroon colours. He is trained by Thomas Fourcy and was ridden by Jerome Cabre.
Mohamed bin Fahad Al Attiyah’s Miss Boum Al Maury (FR) (Boum De Ghazal x Melody Al Maury) was a further length behind, completing a fully-Qatari coloured frame. The Mrs JF Bernard-trained bay filly was ridden by Antoine Werle.
Shadad is by Al Shaqab stallion TM Fred Texas. He is out of the Amer mare Nasrat. He is her first winner recorded on France Galop. Nasrat is a daughter of the excellent producer Nerva de Cassou, the dam of Nizam amongst others.