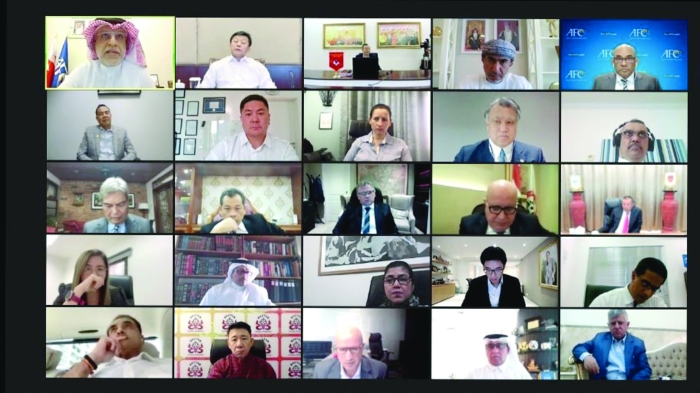 Kuala Lumpur, 12 September 2020 - Shaikh Salman bin Ebrahim Al Khalifa, the Asian Football Confederation (AFC) President, thanked the Qatar Football Association for their willingness to host the return of the AFC Champions League in the West region.
At the AFC Executive meeting, held online, the AFC President congratulated everyone involved in the hard work that has been required to ensure that the AFC Champions League Group Stage West region and knockout rounds can go ahead safely.
Shaikh Salman said: “A huge amount of work has been undertaken to ensure these matches can kick off on September 14 and the AFC has been extremely professional in ensuring that the matches can go ahead and go ahead safely.
“These matches will be dedicated to our frontline health and care workers who have been the real stars in recent months. The return of football is something to celebrate and so is the contribution of the frontline workers.
“It gives some hope to see football back and there has been great work in putting in place the necessary protocols and procedures to keep everyone safe, so we are taking the first steps. We will also work closely with all the stakeholders in Asia and with FIFA to ensure that football continues.”
Members of the Committee congratulated Shaikh Salman and the AFC for keeping the football world ‘moving forward’ and also thanked the Qatar FA for hosting the matches in the coming month.
Under the banner of #FootballforHeroes, the AFC Champions League (West) will be played under special rules to reflect the impact of the COVID-19 pandemic and these include AFC and Host Country Medical Protocols, temperature checks on entry to the Stadium and testing.
A sub-committee of the AFC Competitions Committee has been formed to make any necessary decisions in urgent matters which relate to the centralised competition. It is intended that a similar Committee will be formed in due course for the AFC Champions League East Zone matches which are now scheduled to be played between Nov 15 and Dec 13, 2020.
The Executive Committee also agreed that the final of the AFC Champions League will be played in the West Zone on December 19, 2020 – in a single match rather than in the traditional home and away format.
The AFC Futsal Championship will now be staged in Kuwait but shall be moved from the original dates in November to new dates between December 2-13 to allow Member Associations time to prepare themselves for the competition.