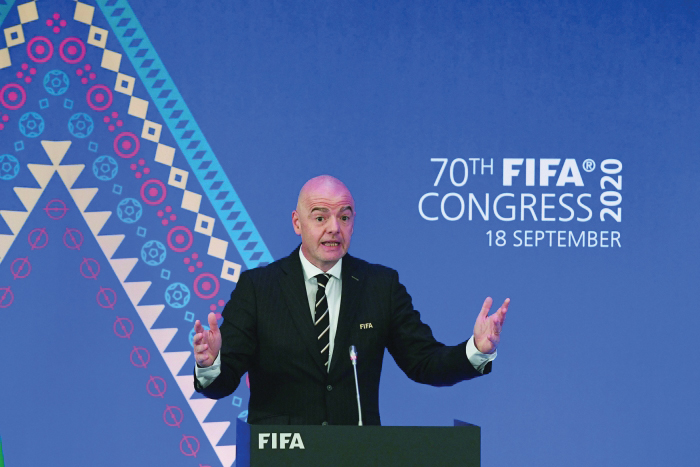 Doha, 20 September 2020 - FIFA President Gianni Infantino on Friday said that while the coronavirus pandemic has delayed football tournaments globally, plans are being worked out “to make sure that the qualifiers for FIFA World Cup Qatar 2022 go through all over the world and that we have a fantastic World Cup in Qatar in 2022”.
Infantino stated this in his replies to questions of the media via videoconferencing from Zurich soon after the opening of the 70th FIFA Congress held online with
delegates from 211 member federations.
To the query of the qualifiers getting postponed, Infantino said, “We have already a new window in the international calendar in January 2022. We will have the qualifiers until June 2022 instead of March as originally foreseen.
“The World Cup (in Qatar) is scheduled for November which gives us a bit more time for the qualifiers to be played all over the world.
“Obviously, the FIFA World Cup is the most important tournament in the world and it is the top priority not only for FIFA but for each and every country around the world.
“Other plans could be to have qualifiers at one venue instead of home and away. We will make sure that the qualifiers go through all over the world and that we have a fantastic World Cup in Qatar in 2022,” he added.
The FIFA President further highlighted football’s power as a force for good in society, and praised the unprecedented move by Qatar to improve workers’ rights: “This is a milestone, this is a game-changer, and it’s not me saying this – it’s the ILO (International Labour Organization), and it is partly thanks to the spotlight of hosting the FIFA World Cup.”
Infantino also said that this year’s Club World Cup in Qatar, scheduled for December, may have to be postponed because of the global health situation.
“We are monitoring the situation. Maybe it can be held at the beginning of the year. We have to see if we can keep it,” he said.
The event is the last of its kind in the current seven-team format. A new-look Club World Cup was to debut next year but has been pushed back to 2022 to allow the postponed Euro 2020 and Copa America tournaments to be played in 2021.
Infantino said it was encouraging that Europe has resumed national team competitions and South America is to follow next month, adding that FIFA would have a “return to play scheme” ready next week.
Meanwhile at the FIFA Congress, Infantino restated FIFA’s support for the football community. He lauded the FIFA Council’s June decision to make available up to US$1.5 billion, largely funded from the organisation’s solid financial reserves, in order to support the MAs through the FIFA COVID-19 Relief Plan, which has already seen over 150 MAs submit funding applications: “FIFA is not facing a crisis, but football is... The money goes where it has to go: to football, and to help football.”
Further emphasising the strength of the new FIFA as a partner for social change, President Infantino said, “As well as for our stakeholders, sponsors, and broadcast partners, we are also a solid partner for the UNODC (United Nations Office on Drugs and Crime), the World Health Organization, the World Food Programme, UNESCO, UN Women, the Council of Europe, the African Union, the Association of Southeast Asian Nations, and the members of the G20.”
On the importance of cooperation, President Infantino referred to FIFA’s freshly signed memorandum of understanding with the UNODC to combat match-fixing, corruption and child abuse: “On our own, we sporting bodies are not geared up to tackle these crimes and we have to search for collaboration, and I’m proud that we’ve found a partner like the UNODC to fight these fights together with us.”
Infantino also hailed the global impact of last year’s FIFA Women’s World Cup in France and reiterated FIFA’s prioritisation of women’s football through the recently launched FIFA Women’s Development Programme and investment totalling US$1 billion over the current four-year cycle.