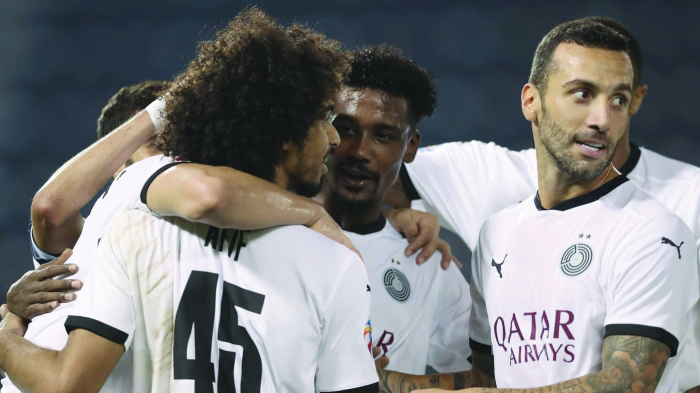 Doha, 20 September 2020 - Al Sadd SC’s ability to raise their game in the second half was the reason for the Qatar side’s 4-0 win over Al Ain FC in Group D of the 2020 AFC Champions League on Friday.
Al Sadd led 1-0 going into the half-time break but turned on the power in the second period to score an emphatic win which took them to eight points and well in sight of a berth in the Round of 16.
“It was a very difficult match, especially in the first half as we were confused,” revealed Khoukhi. “We made things right in the second half and we took advantage of the fact that we knew a lot about our opponents from the previous match.”
The sides had drawn 3-3 in their Matchday Three encounter on Tuesday.
“We forgot about the draw and we went into today’s match with the aim of winning,” said the 30-year-old defender.
Khoukhi said Al Sadd’s inconsistent performance was due to the inclusion of new players, who need time to gel with the team. “We have some new players and they need time to get in sync with the team,” he said. “We are in a big competition and these are tough matches, which are totally different from the local league and players should be at their best.”
Al Ain FC skipper Mohammed Abdulrahman admitted the defeat was hard to swallow, especially after the Emirati side’s first half performance.
“It was a very harsh defeat after our first half performance,” he said. “We were good in the first half but we didn’t take advantage of the chances that we created.
“When you don’t score, you will concede goals and this is what happened tonight. I don’t know what to say because such a defeat is really painful.”
The 31-year-old midfielder added that lack of competitive football affected Al Ain.
“We didn’t play official matches for a long period and this affected us,” he said. “There were some players who got tired because playing two matches in three days is not easy.
“I hope that the young players will learn from these matches and hopefully, we can fix the mistakes that we made and improve in our remaining two matches.”