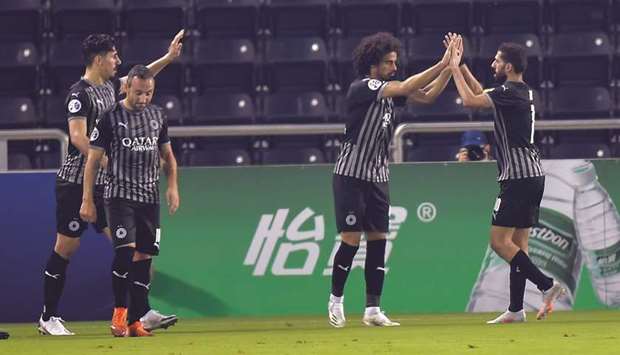 Doha, 27 September 2020 - The 2020 AFC Champions League Round of 16 continues today with the first fixture of the day pitting Iran’s Persepolis FC against Al Sadd SC at Education City Stadium.
Al Sadd cruised to the 2020 AFC Champions League Round of 16 with a game to spare, and after losing to Al Ain on Matchday Six, they finished second in Group C behind Al Nassr with nine points. The Qatari side boast the strongest attack in the competition with 14 goals to their name so far.
Qatar’s most successful side in the AFC Champions League, Al Sadd have appeared in the competition on 13 occasions, reaching the knockout stage six times prior to 2020, winning the title in 2011 and reaching the semi-finals in 2018 and 2019.
“Persepolis defeated us in the semi-final two years ago, so the players are aware of how difficult an opponent they are,” said Al Sadd head coach Xavi, who was club captain in that 2018 match-up.
“Our style is straightforward; we like to keep possession and impose our rhythm on the match. Persepolis have a level of intensity and enthusiasm I have never seen. In this competition, every ball and every moment is important. We have to fight for every ball, win the second ball every time and continue to work hard until the final whistle.”
Persepolis have made it to the knockout stage for the sixth time in their history, their most recent effort taking them all the way to the final of the 2018 edition, which they lost to Kashima Antlers of Japan.
This time around, Persepolis needed a win on Matchday Six to confirm passage from Group C, and they delivered in style after beating UAE Pro League side Sharjah 4-0, while Al Taawoun’s late win against Al Duhail meant Persepolis’ result took them to the top of the group.
“We face a difficult encounter against a strong and organised Al Sadd team,” said Persepolis captain Seyed Jalal Hosseini ahead of the today’s encounter.
“All teams in the AFC Champions League are strong and we know Al Sadd have some really good players especially in attack, but we have intelligent analysts who will do well to analyse the opponents and the coaching staff will help us prepare well. It will be a tough game for both sides.”
In the 2018 semi-finals, Persepolis took home a valuable 1-0 win from Jassim Bin Hamad Stadium courtesy of a late Ali Alipour penalty, and were able to hold to a 1-1 draw at Azadi Stadium three weeks later as Siamak Nemati cancelled out Baghdad Bounedjah’s goal for Al Sadd, sending Persepolis into their first-ever final.
Today’s match will be the seventh encounter between Persepolis and Al Sadd. The Iranians hold a marginal historical advantage with three wins to Al Sadd’s two victories, while the 1-1 draw in the 2018 semi-final was the only such result between the two sides.