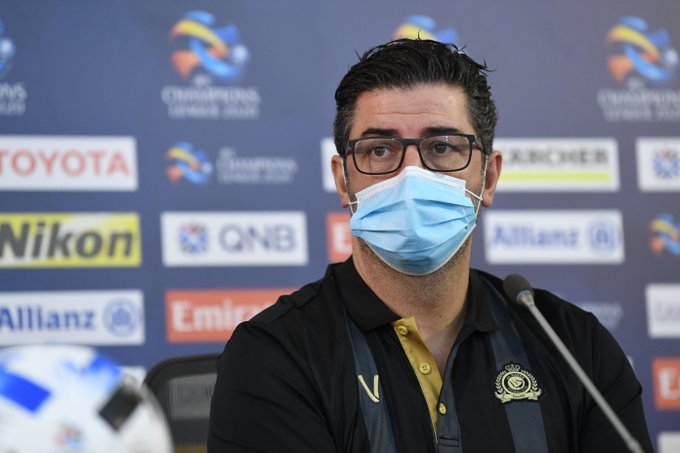 Doha, 3 October 2020 - The 2020 AFC Champions League (West) culminates with the semi-final clash between Saudi Arabia’s Al Nassr and Iran’s Persepolis FC at Jassim bin Hamad Stadium today.
Both sides finished top of their respective groups, with Al Nassr collecting 11 points to pip Al Sadd to the summit of Group D, while Persepolis mounted a comeback from one point in their first two games to qualify as Group C leaders with nine points, a point ahead of second-placed Al Taawoun FC.
Similarities in the two teams’ paths to the semi-final continued in the Round of 16, with both needing late goals from their prolific strikers. Abderrazzak Hamdallah’s calmly-taken effort with 15 minutes to go was enough to guide Al Nassr past countrymen Al Taawoun, while Isa al-Kasir left it until two minutes from time to send Al Sadd crashing in a 1-0 win.
In the quarter-finals, both Al Nassr and Persepolis won with a 2-0 scoreline. Abdulfattah Asiri and Pity Martinez scored either side of the break to help Al Nassr overcome Al Ahli Saudi FC, while it was al-Kasir again with a brace to down Pakhtakor.
“This is a final match. We wanted to arrive at this game, and we are happy to be here but now we have a game that both teams want to win,” said Al Nassr head coach Rui Vitoria.
“Since the beginning we have been confident. We respect the different problems each opponent poses to us. All teams have areas where they are good and others where they are not so good.
“We know Persepolis have some very good players, but confidence is something that comes from inside for us. We have to enjoy our play but also have the responsibility; this balance is my message for the players ahead of this final.”
Unlike Al Nassr, Persepolis have been at this stage of the competition twice in the past three years. In 2017, they were beaten by Al Hilal SFC 6-2 on aggregate, and the following year, they learned their lesson and beat Al Sadd 2-1 to reach the final, which they lost to Kashima Antlers but Vitoria remains unfazed by his opponents’ richer recent history.
“Yes, this is the history, but if I think only about the history, then we have not been here before. But no, I will think about it as one game; two good teams playing against each other. My players are in the semi-final for the first time, but they just need to go and play well against a good team. History does not have an impact on the game.”
Vitoria’s opposite number Yahya Golmohammadi took a different view of his side’s record in the competition in recent years, while acknowledging the 2020 AFC Champions League throws Persepolis a different challenge.
“Any team that comes this far in the competition is here on merit; Al Nassr played very well and earned their place at this stage and we overcame many hurdles to come this far,” said the Persepolis head coach.
“Our record proves we always have a lot to say in this competition. It shows good planning at the club and togetherness between the players as well as mental strength. This year the difference is that we do not have the advantage of playing in front of our fans in Azadi.
“It is not easy for us, but they still give us their positive energy through social media and that gives us a lot of motivation and we are hopeful of going back to Iran with a good result. Our ambition is to be champions of Asia.
“Persepolis fans and the people of IR Iran have gone through difficult times recently, and we hope winning here can give them something to celebrate and be happy about.”
Despite 14 AFC Champions League campaigns between them, Al Nassr and Persepolis have only met in the competition twice, both coming in the group stage of the 2015 edition. Al Nassr emerged 3-0 winners in Riyadh, while Persepolis won 1-0 at Azadi Stadium. On the occasion, Persepolis progressed as group runners-up, while Al Nassr finished third and were eliminated at the group stage.
Golmohammadi has history in this match that predates the AFC Champions League, having been a Persepolis defender when they faced Al Nassr in Doha in the 1996-97 Asian Club Championship, a match Persepolis lost 3-2, but went on to top the group at the expense of Al Nassr and reach the semi-finals before losing to eventual champions Pohang Steelers of Korea Republic.