Al-Attiyah and off-road legends all set for Andalucia Rally 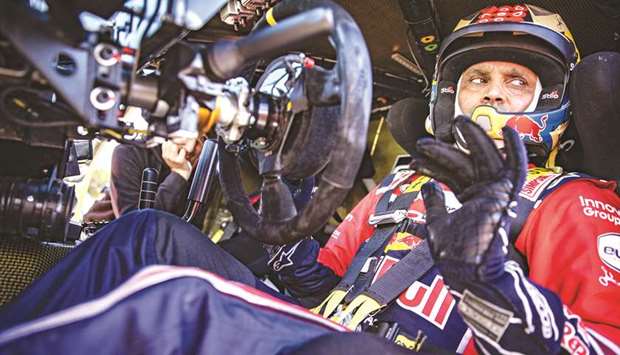 Doha, 6 October 2020 - Qatar’s Nasser Saleh al-Attiyah and some of the best rally-raid racers on the planet are coming to Spain to compete in the brand-new Andalucía Rally starting today till October 10. There are a host of Dakar Rally champions in the pack as well as some intriguing rookies to keep an eye on over the five days.
Expect a heavyweight tussle in the car category as Qatar’s al-Attiyah, Spain’s Carlos Sainz and Stephane Peterhansel of France engage in an exciting battle for supremacy. This trio has won the Dakar a staggering 19 times between them besides picking up a host of other honours, including WRC and MERC titles, and Olympic medals.
“It’s always great to test ourselves against our Dakar rivals,” al-Attiyah said.
The Qatari, with his French co-driver Matthieu Baumel will continue with the Toyota Hilux he has been helping to develop over the past seasons and brought to victory at the 2019 Dakar.
“We’re very happy to have this opportunity to get back to racing rally-raid in Andalucia. Our target is to go fast and to win this race, like we aim to do at every rally we compete in. It will be great to get to work with the team again and get everything ready for Dakar.”
Reigning Dakar champion Sainz will be at the wheel of a MINI John Cooper Works Buggy.
“Despite the difficult time we were able to find some areas that we could improve on. The team has done a great job and I think we have become even better,” Sainz said.
Mr Dakar, Peterhansel, takes control of the 4x4 MINI Rally which he drove to victory at last month’s Baja Poland.
“My motivation is still there – maybe even more so as I know that the Buggy will be even better. I have a new co-pilot sitting next to me and I think Edouard (Boulanger) has a lot of potential that he can certainly exploit to the fullest at the Dakar. I am also very much looking forward to Saudi Arabia – the landscape there is simply incredible.”
There has been plenty of time for reflection for the Red Bull KTM Factory Team after they missed out on victory at the Dakar earlier this year, ending an unprecedented winning streak stretching back nearly two decades. The team take their place in the bike race at the Andalucía Rally with a firm focus on getting back to winning ways.
Former Dakar champions Toby Price of Australia, Sam Sunderland of Great Britain and Matthias Walkner of Austria will all saddle up for the Red Bull KTM Factory Team in Spain. Also along for his first ride as part of the all-conquering KTM team will be new recruit Daniel Sanders of Australia.
“I’m really thankful that the organisers have managed to arrange this rally in Spain, and we get to go racing again. After all, it’s what we love to do,” Price said.
Walkner added: “Testing has been going well and the bike is feeling good, so now hopefully a good result in Andalucía and then concentrate on Dakar.”
Racing in her homeland will be Laia Sanz with a GasGas bike while CS Santosh of India will be onboard Hero hardware for the 1,354-kilometre rally in southern Spain.
“Coming out of the last Dakar I had two broken ligaments in my hand and these injuries take a long time to recover from. To be coming back now after a long recovery and everything else that has been happening feels good,” Sanz said.