QFA participates in "Together to Protect Education" campaign 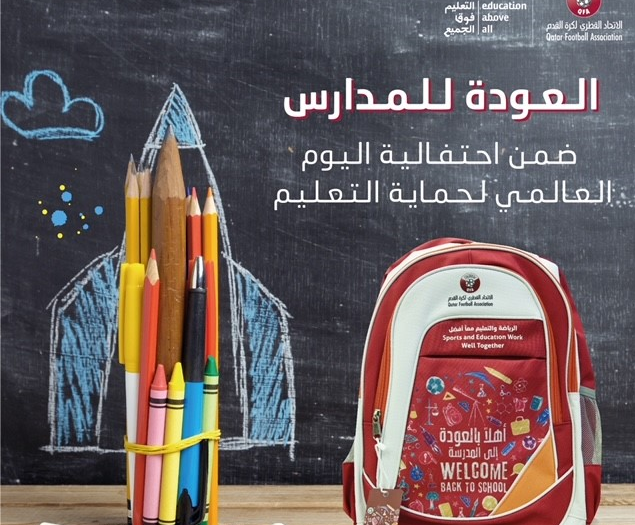 Doha, 6 October 2020 - The Qatar Football Association participated in the "Together to Protect Education" campaign launched by the Education Above All Foundation, based on its pioneering role in social responsibility, which coincides with its celebration of schools returning by sending 500 gifts including school bags and stationery, to the Primary and Secondary school of Doha’s Peace Academy.

The participation of the Qatar Football Association comes as part of its social responsibility program for the 2020-2021 sports season with its wide range of activities targeting students in Qatar.

The cooperation between Qatar Football Association and the Education For All Foundation is nothing new, as it is an extension to an already existing agreement between the two sides to host programs at the local and international levels.

The QFA said, "Football has become a major factor in equipping and preparing young people with life skills and increasing a sense of sportsmanship, and it is our commitment to encourage all sectors of the local community to participate in the most popular game in the world, by integrating football with the local and regional community through targeted social programs."

It seeks to involve these sectors in the tournaments and competitions organized by the QFA and the Education Above All Foundation together, through a variety of different activities suitable for all ages.

On this event, Mr. Khaled Mubarak Al-Kuwari, Director of Marketing and Communications with the Qatar Football Association, expressed his great pleasure in participating in the campaign "Together to Protect Education" through the "Back to Schools" event, which targets a large sector of society’s students, explaining that the QFA has shown great interest in student-oriented programs by designing specified programs for schools such as the “Football Time” program and the Friends of the Union in Schools, in addition to the Schools League competition, and various other activities related to youth football.

Al-Kuwari said: “This celebration affirms the role of the Qatar Football Association in the local community by strengthening its role on community partnership with school students with the aim of creating a generation that loves the game of football, and that these events are the core of the QFA’s work that seeks to link football with all Segments of society, especially children. "

On his part, His Excellency Sheikh Mubarak bin Nasser Al Thani, Director of Communications Department and Head of Advocacy Department at the Education Above All Foundation, said: “We appreciate the efforts of the Qatar Football Association and its role in enhancing our efforts in achieving sustainable human development goals, and also contributing to the realization of Qatar National Vision 2030. Pointing out that the “Together to Protect Education” campaign aims to raise awareness and gain global support to ensure accountability for the ongoing and deliberate attacks on education and the prevailing armed violence suffered by children around the world, which comes during the back-to-school season and aims to ensure that no child is left behind, and to reduce the number of children out of school and give them a better chance to build their future. "

He explained that sports is an effective and flexible tool to promote the goals of peace and development, given its role in encouraging tolerance and respect, and its contribution to empowering women, youth, individuals and societies, and in achieving the desired goals in the fields of health, education and social integration.

The "Together to Protect Education" is a global campaign calling for the protection on education from attacks as they have partnered with the United Nations Children's Fund / UNICEF / the United Nations Educational, Scientific and Cultural Organization / UNESCO / Qatar Fund for Development and the campaign Save Our Future.