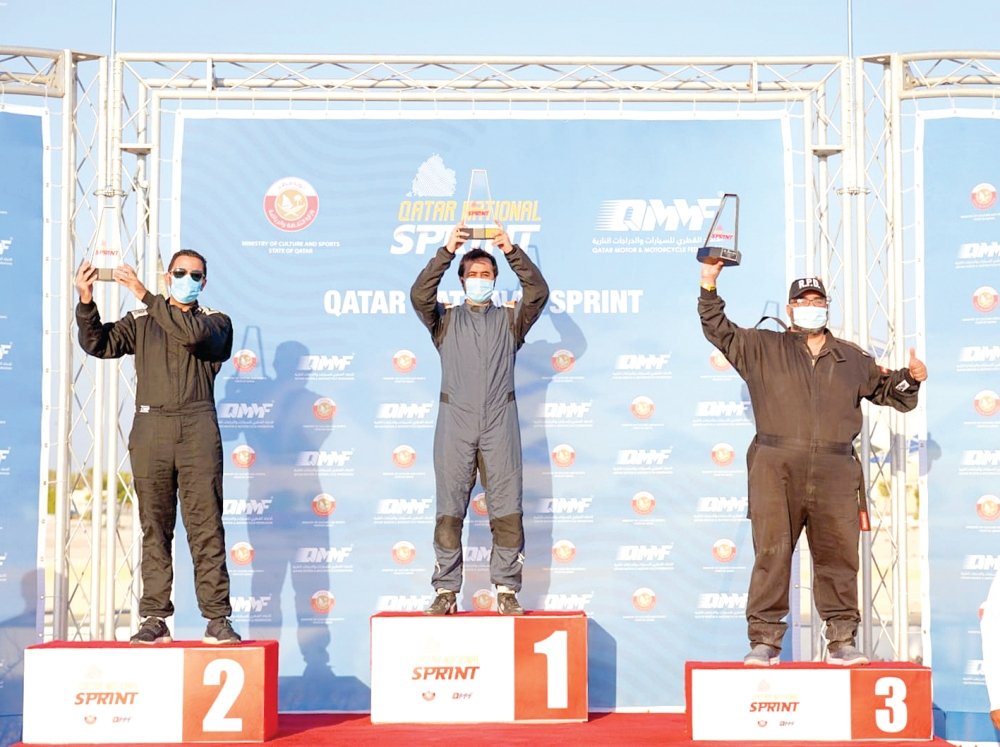 Doha, 12 October 2020 - Abdullah Al Khelaifi returned to the Qatar National Sprint action on Saturday with gusto only to win in two categories of the third round held at the Qatar Motor & Motorcyle Federation’s track at Losail.
The third round of the Qatar National Sprint (QNS) also marked the return of the sporting action for QMMF after the season was brought to a sudden halt in March due to the coronavirus (COVID-19) pandemic in March.
The return of QNS saw the third round being held with all health precautions in place and in line with the guidelines issued by the Ministry of Public Health.
There was another set of health safety guidelines set by the FIA for QMMF to follow.
“We had medical protocols put in place by the FIA (international automobile federation) and FIM (international motorcycling federation) besides the MoPH protocols and we adhered to all those. We are happy that we have resumed the season and the Qatar National Sprint saw a good contest,” said Amro Al Hamad, QMMF’s Executive Director.
Al Khelaifi, a champion driver and seasoned campaigner, stood out in O1 and O3 class in Westfield Sport and Supra cars respectively. While he was the fastest in O1 clocking 52.059secs and 51.097secs in the two rounds, he finished in 53.681secs and 52.169secs in the O2 category.
The winner of O1 in the second round of QNS in February, Abdulaziz Al Jabri (also driving Westfield Sport) ended as runners-up this time (55.557, 54.945secs).
Elie Daccache was third in a Renault Clio.
The O2 category was won by Mohammed Al Khayarin, another champion driver, who excelled in his Mitsubishi Evo 10 finishing ahead of Mohammad Al Basti (Subaru STI WRX) and Ali Emadi (Nissan 370Z).
In O3, ending up behind Abdullah Al Khelaifi were Abdulla Al Abbasi (Lotus Exige) and Mohammed Al Khayarin (Chevrolet Corvette).
The P1 category competition saw Henry Kahy emerge as the winner in Renault Clio, ahead of Saeed Fahd and
Salman Khalat.
Dean Bali (Porsche Boxster 718) won in P2 where Dennis Nikitopoulos (Nissan 370Z) and Mohammed Al Jabri (Nissan 350Z) finished second and third respectively.
Francesco Fornaciari (Lotus Exige), Hosan Al Qatami (BMW M2) and Ayad Al Okar (Supra) ended up on the podium in the P3 category.