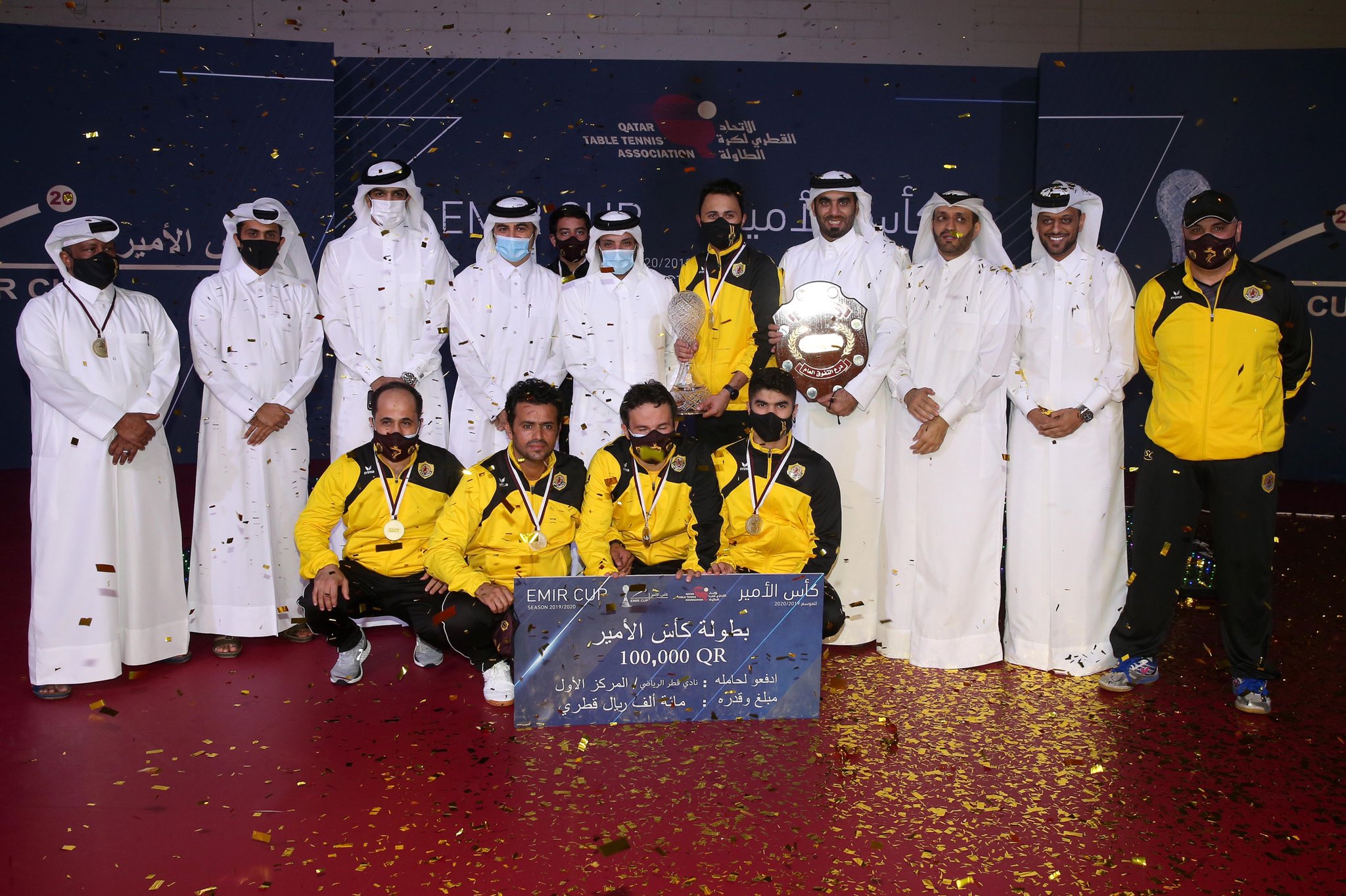 Doha, 13 October 2020 - Qatar Sports Club (QSC) won their third successive HH The Amir Cup table tennis title scoring a 3-1 victory over Al Sadd in the finals played at the Abdullah Bin Suhaim Hall.
The winners took home the trophy as well as a cash award of QR100,000, while runners-up Al Sadd received QR60,000.
After the finals at the Qatar Sports Club, Khalil Al Mohannadi, President of the Qatar Table Tennis Association (QTTA), crowned the winners in the presence of HE Sheikh Saud bin Ali Al Thani, First Vice-President of the Qatar Olympic Committee, Sheikh Suhaim bin Abdulaziz, Vice-President of Qatar Sports Club and other officials.
Qatar Sports Club topped Group A and defeated Al Arabi in the semi-finals, while Al Sadd topped Group B and ousted Al Khor to reach the finals.
On Monday, Al Sadd started off with a victory in the first singles with their Chinese professional Chen Hao defeating Ahmed Khalil Al Mohannadi 11-6, 11-8, 11-6.
But they could not build on their lead as Qatar Sports Club leveled the scores with Slovenian Bojan Tukic comfortably beating Walid Nasser 11-1, 11-4, 11-2 in the second singles.
Mohamed Abdelwahab then accounted for Ahmed Muthanna 11-6, 11-9, 7-11, 11-7 to put Qatar Sports Club 2-1 ahead.
Tukic later completed the formalities, beating Chen Hao 11-8, 8-11, 12-10, 9-11, 11-9.
HE Sheikh Saud bin Ali Al Thani praised the Qatar Table Tennis Association for organising an excellent tournament and congratulated the winners.
“The tournament was held in a very professional manner and the matches were also of great quality,” he said
Qatar Sports Club player Ahmed Khalil Al Mohannadi said Al Sadd were tough opponents and his team had to be at their best to beat them for the title.
“Our team proved its worth for the third year in a row. We deserved the trophy and I dedicate this achievement to the club’s management, headed by HE Sheikh Hamad bin Suhaim Al Thani, who fully supported the team, and also to team head Khaled Al Kuwari and members of the technical staff,” said Al Mohannadi.
The QTTA President also congratulated Qatar Sports Club saying they have proved their mettle not only in Qatar but also at the Arab level.
“Qatar Sports Club have also won the Arab Championship so their success is not a great surprise,” he said.
“They are one of the best clubs as far as table tennis is concerned in the Arab world.”