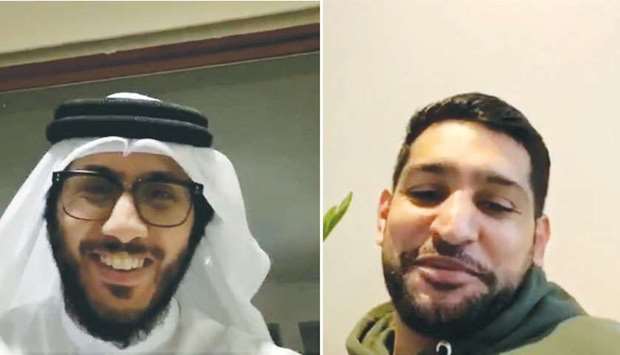 Back in April of 2001, Sheikh Fahad, still a young teenager of 14, came back home crying because British pro boxer Naseem Hamed was handed his first and only defeat in what turned out to be his penultimate bout.

“That loss of Hamed had broken the hearts of Muslims around the world. To us, we didn’t even know the name, but he was just the Mexican boxer who beat Naseem Hamed,” Sheikh Fahad tells Khan.

Eight years later, Khan was 19-1, many doubting his abilities after a brutal loss to Colombian Breidis Prescott. “Those close to me doubted me. Sponsors, friends left me,” Khan says of the time.

In March of 2009, in the heart of Manchester, Khan beat the Mexican in a technical decision result.

“I remember when I came back to Qatar, everyone was so excited that Amir Khan has beaten the Mexican who beat Naseem,” the Qatari welterweight boxer tells the 2004 Athens Olympic silver medallist, who at 17 was Britain’s youngest Olympic medallist.

“There was no social media at the time,” Khan responds. “I just didn’t know the response to my win, especially in the Middle East. I received a lot of emails that were sent to my team; I wasn’t reading them. I was told what a good response the fight got in the Middle East. Naseem was a legend.”

The conversation meanders through various stages of Khan’s life, right from the age of 8 when his father took him to a local gym to help him burn off the extra hyperactive energy to sponsors landing up with huge deals right after his Olympic performance to recently, when Khan was appointed as the President of the World Boxing Council’s (WBC) Middle East division.

The conversation also adds some heft to the idea of Qatar hosting a big boxing card.

“I have travelled to different areas in the Middle East, and there are boxing gyms everywhere. But they need one company, one organisation to help them. And I am here to do that now and it is my duty, and Insha’Allah, we can make that happen… big events,” Khan says when talking about his role as the WBC Middle East President.

“Two million percent I know Qatar can host a big fight. Qatar is already one step ahead on most other countries. Qatar already has a sports institute in Aspire, Aspetar, already working on the World Cup. Lucky to have a place like that. I have been there myself, and I have seen the infrastructure, stadiums, everything is there. Something may happen quick,” Khan says.

“We can fight on the same show,” he tells Sheikh Fahad, who is as excited as Khan by the prospect.

Khan calls boxing “the toughest sport in the world. One mistake and the whole world goes against you.”

But it is a sport that both of them are understandably passionate about.

Khan’s appreciation for Sheikh Fahad’s gym in Doha, where the Qatari trains under the watchful eyes of long-time trainer Franck Bohec, is: “It looks like a proper sweat-box.”

There is excitement about scheduling potential bouts for Sheikh Fahad with other Arab boxers, Khan’s pro-show in Pakistan earlier this month, training abroad in gyms with world champions as stablemates, etc.

Right after the loss to Prescott, Khan had signed up with Freddie Roach as his coach and headed to Wild Card Boxing Club in Los Angeles. Highlight, of course, was training and sparring with Manny Pacquiao.

“Going to the Wild Card boxing gym in Los Angeles is something else. If anyone gets an opportunity to go and have a training camp abroad where they are not known and they get to put in the hard time, they should. It’s probably the best for them,” Khan says.

“When I was in a gym with Manny Pacqiuao, I had just come off a loss to Prescott, the confidence it gave me when I was sparring with him, it made me a better fighter. When you train with champions, it makes you train harder.”

Sheikh Fahad pitches in about his own time with Ismael Salas in Las Vegas. “I was in Vegas with the likes of (multiple-time three-weight champion) Jorge Linares, (former lightweight champion) Rances Barthelemy, (WBA Cruiserweight champion) Beibut Shumenov. I was the first pro to come from Qatar. No one (in Qatar) was going to tell me as to this is what you have to do,” says Sheikh Fahad, who is 13-0 in his pro career that started in 2016.

There is even talk about WBA, WBO and The Ring lightweight champion Vasiliy Lomachenko of Ukraine facing IBF champ Teofimo Lopez of the US over the weekend.

“Lopez looks like he is confident, he is not scared, looks ready,” Khan says, adding how Lomachenko is a “technician”.

For the record, Lopez won in a unanimous decision to become the unified lightweight champion of the world.