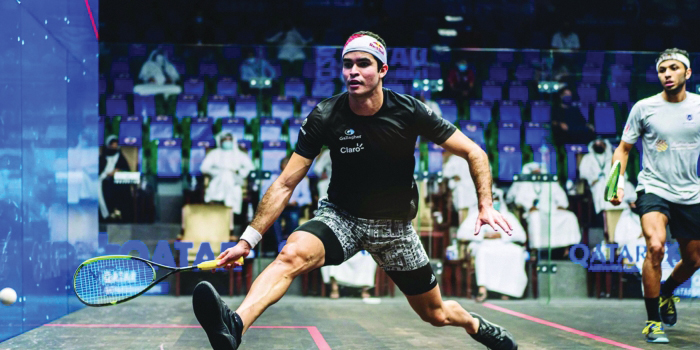 The No.5 seed was also helped by a hamstring strain sustained by Al Tamimi, who was forced off court for an injury break during the third game while 8-6 down.

Elias will take on fellow South American Miguel Rodriguez in the next round. Colombian Rodriguez overcame USA’s Shahjahan Khan in straight games.

“We’ve played all of our lives,” said Elias following the match. “I think the first time we played I was 14 and he was 16. We played a couple of times in juniors and he beat me there also, it’s the first time I’ve beat him here. He is really hard to play, he has so many different shots from the front and I never know what he’s going to do.

“With Miguel, we’ve played four times in PSA but maybe 35 times in South American tournaments and Pan American tournaments. I’ve only beat him once in like 30 times, so it’s always a really tough match. I’ve been watching him since I started playing, so I’m really looking forward to that match and I’m feeling good.”

Meanwhile, Egypt’s Ali Farag began his second reign at World No.1 with a comfortable victory over England’s Richie Fallows, winning 11-9, 11-8, 11-3 in 28 minutes, the shortest match of the round.

Farag is the defending champion in Qatar after beating Germany’s Simon Rosner at the 2018 tournament and needs to reach the final in Doha this week to be certain of retaining the World No.1 spot which is under threat from three-time champion Mohamed ElShorbagy, who relinquished the ranking to Farag two days ago.

“We’ve never played before, but I know how talented Richie is,” said Farag afterwards.

“This is a unique court in a good way in that it takes the ball in very easily, so any bad shot and you’re penalised immediately. All credit to Richie, he played really well. In the first two I couldn’t really find my range, and in the third I was happy I was able to find the corners I was intending to”

Reigning World Champion Tarek Momen made his return to the venue where he won the biggest trophy in men’s squash 12 months ago with a hard-fought 3-1 win over fellow Egyptian Youssef Soliman.

World No.3 Momen, who beat New Zealand’s Paul Coll in last year’s PSA Men’s World Championship final, wasn’t at his best against a dogged Soliman, but did enough to book his place in the last 16 courtesy of an 13-11, 9-11, 11-1, 11-5 victory which will see him play former World No.1 James Willstrop in the next round.

“The issue is we are playing partners and so we play a lot together and that made it difficult today,” Momen said.

Meanwhile, Malaysia’s Eain Yow Ng has earned his spot in the third round of a Platinum event for the third time in four events after the World No.31 took out England’s Declan James with a terrific 3-0 victory.

Yow is ranked seven places below James in the PSA World Rankings but put in a peerless performance to win 13-11, 11-7, 11-8, earning him a third round meeting with Farag.

“Once the tour was suspended (due to COVID-19), I knew it would not be be possible to break in to the top 20,” Yow said.

Round three begins Wednesday at 11:00hrs (GMT+3) and will be shown live on SQUASHTV and the official Facebook page of the PSA World Tour.Second Round