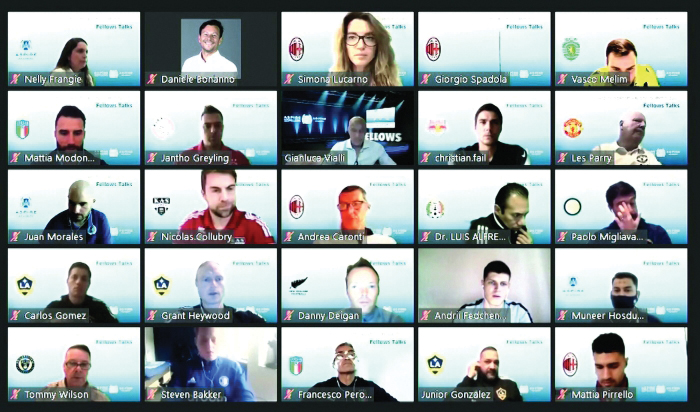 Doha, 8 November 2020 - The 6th Edition of Aspire Academy Global Summit Football Performance and Science 2020 held virtually on November 5 was applauded by all participants as a resounding success topped off by inspirational talks from outstanding diverse speakers.
In attendance were about 200 invited Aspire Fellows Community members from 50 leading clubs and 11 national federations. The online summit served a mix of 15-minute-long talks, research presentation and workshops.
In his opening remarks, Professor Valter Di Salvo, Executive Director of the Summit, said, “To be able to meet like this online is a testament to Aspire Fellows Community’s strength, belief and excellence that together we have nurtured and developed since we began in 2014. During this difficult period with the pandemic we must find ways to reduce distance between ourselves as well as between coaches and players and have been able to do so, thanks to webinars.
“This year the summit moved from round-table to TED Talk format as we learn from inspirational speakers from different sports and fields. We travel from football, fencing, athletics, eSports and to Spaceflight. Aspire Academy is a leader in sports performance and science in Qatar and beyond and we are proud and happy to continue contributing in the development of youthful athletes through among others encouragement of scientific modern ways including latest research and technologies,” said Professor Valter Di Salvo.
Former Italy international player Gianluca Vialli, who shared stories on personal history on talent, leadership and failure, spoke about the time when he was called by Chelsea chairman for a meeting only to be sacked as team manager. “I realised, I needed to be honest with myself and be self -analytical. l had made mistakes and accepted them and learnt from them. Failure is part of the process of what we do. There are no failures out there- only set-backs and remember you can come back stronger from set-backs”, remarked Vialli, who considers himself lucky to have transformed his passion into a career as a footballer.
Talking about management in football, the former Sampdoria, Juventus and Chelsea player stressed, “The things we believe in and our philosophy of life determine the coach or manager we become. Leadership is a transformation of your character. Great leaders have been great followers.”
In terms of his perspective on talent, he said, “Talent is a gift, but it is not the most important aspect in a sportsman’s life - the process of nurturing that talent is more important. A good work ethic, body language, attitude, your energy and effort require zero talent but are very important part of how you transform your passion into a job.”
Paralympian fencer Bebe Vio,( Beatrice Vio) in her talk spoke about how she and fellow impaired athletes are out to inspire a new generation of athletes to find the strength that lies with everyone.
The only wheelchair fencer in the world to compete with no arms and no legs, Bebe Vio shared on inner belief and drive her family has been her mainstay. “40% of my body is technology. I started fencing at an early age of 5 and when l was 11 l was struck by meningitis and while everything changed my family didn’t and remained very important in my life and career. The gold medalist Paralympian fencer, thanked Aspire Academy for the work it is doing in the world of sport giving a platform and supporting sport development which dovetails with her own goals with WEmbrace.
Bebe Vio is heavily involved with WEmbrace -- a global movement is aiming to get impaired people into sport and also use sport to unify Paralympics and Olympics.
“Paralympics is a platform that inspires many and allows the disabled to show that there are no limits,” said Bebe Vio.
Former world record relay sprinter Jean-Charles Trouabal shared on the power of teamwork and its merits drawing on lessons he and his team-mates cultivated on their way to winning the 4 x 100m relay race with a world record time at 1990 European Championships.
Talking about rising from being an underdog to the favourite, eSports back-to-back world champion, Sebastien Debs said, “Competition at any level should be treated as a learning experience. You learn through your losses but also remember to win and learn from that too.”
NASA Astronaut, Mike Fincke shared on the importance of teamwork as well how vital strength and fitness is in the life of Astronauts that the link became obvious. “Spaceflight is the biggest team sport there is – it can be argued that it’s not football or any other such sport because it takes 15 nations working together to build the International Space-station. Spaceflight is like sport, there is lots of training and working together required to succeed. The values of keeping faith and trust, moving forward, embracing a feedback culture and managing one’s emotions form the core to achieving success in Spaceflight,” he said.