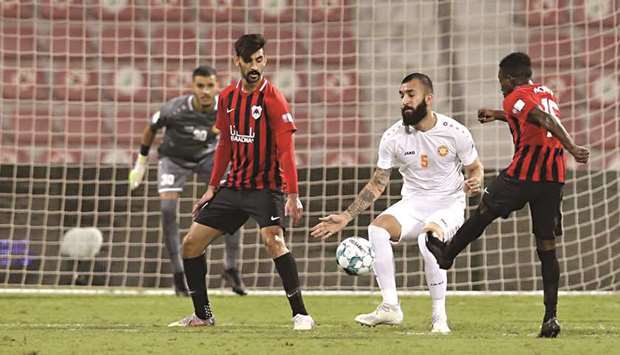 Doha, 10 November 2020 - Al Arabi defeated Al Kharaitiyat 2-1 in a Group B fifth round match of the Ooredoo Cup at the Al Arabi Stadium yesterday. Fahad Khalfan scored two goals in the 45th and 52nd minute for Arabi, whereas Evans Mensah netted Kharaitiyat’s goal in stoppage time (90+4).
It was Al Arabi’s third win from five matches. Coached by Heimir Hallgrimsson, The Dream Team finished their group matches with a tally of 11 points, while Al Kharaitiyat remained on six points. In the 39th minute, Hassan Kamal of Kharaitiyat nearly pulled off a long-range stunner when his volley from outside the Arabi box went agonisingly close to the left of keeper Sataa al-Abbasi.
Arabi opened the scoring with a slick goal. Khalfan, lurking inside the Kharaitiyat box unmarked, latched on to a loopy cross from the edge of the box, lunged forward and tapped the ball into the net even as Oumar Sako tried to kill the move near his own goalmouth.
Overall, Kharaitiyat remained in control of the first half, enjoying 65 per cent of possession. Arabi doubled their lead after Fahad Khalfan, who received a well-timed slip pass, launched a missile from outside the Kharaitiyat box. His left-footed drive smashed into the net with keeper Mustafa Abdulkardeen in no position to stop the ball.
Three minutes later, it was Khalfan again, straddling into the Al Kharaitiyat box, but the goalkeeper stopped his low powerful shot. Mensah unleashed a powerful swinging shot from the edge of Arabi box in the 69th minute, but his shot bounced off the goalpost. However, Menshah was not to be denied deep into the game as he found the target with a spectacular free-kick to reduce Kharaitiyat’s deficit.
In another Group B match, Al Rayyan beat Umm Salal 2-1 with goals from Yohan Boli (58th minute) and Ali Farydoon (79th). Rayyan finished third in the group with seven points, while ended up fifth with four points.
Meanwhile, table-toppers Al Gharafa sailed past Al Ahli at the Al Khor stadium. Gharafa’s goals were scored by Saeed Alhaj, Othman Alawi and Sufian Hanni. Gharafa finished the group stages with 13 points, while Ahli remained bottom of the table with one point.
Meanwhile, Al Duhail take on Al Khor in a must-win match today. The reigning QNB Stars League champions are bottom of Group A with just three points and were handed a 0-3 drubbing by Al Sadd last week.
Even a win today against Al Khor would not guarantee them a quarter-final spot as their goal difference of -6.  For Al Khor, who are placed third with six pointsbehind Al Wakrah and Al Sadd, a draw should be enough to book a place in the last eight.
Al Khor had started off their campaign in grand style by beating Al Sailiya 5-1, but they suffered a 1-2 defeat at the hands of Al Wakrah in Round 2. However, The Knights bounced back with a 2-0 win over Qatar SC in Round 3, only to lose 0-1 to reigning champions Al Sadd.
In another match, Qatar SC will host Al Sailiya and hope to eke out a victory.  Qatar SC are placed fifth in the group with four points, one point less than fourth-placed Al Sailiya.
The third match of the day will pit table-toppers Al Wakrah against second-placed Al Sadd at the Qatar SC stadium. Wakrah have eight points with two victories and as many defeats, with Sadd behind them by one point.
The Blue Wave beat Al Khor 2-1 and Al Duhail 3-1, while they drew 1-1 with Qatar SC and 2-2 with Al Sailiya in the last round. Reigning champions Al Sadd are on a high after beating defending Duhail and a win today will ensured them a top spot in the group.