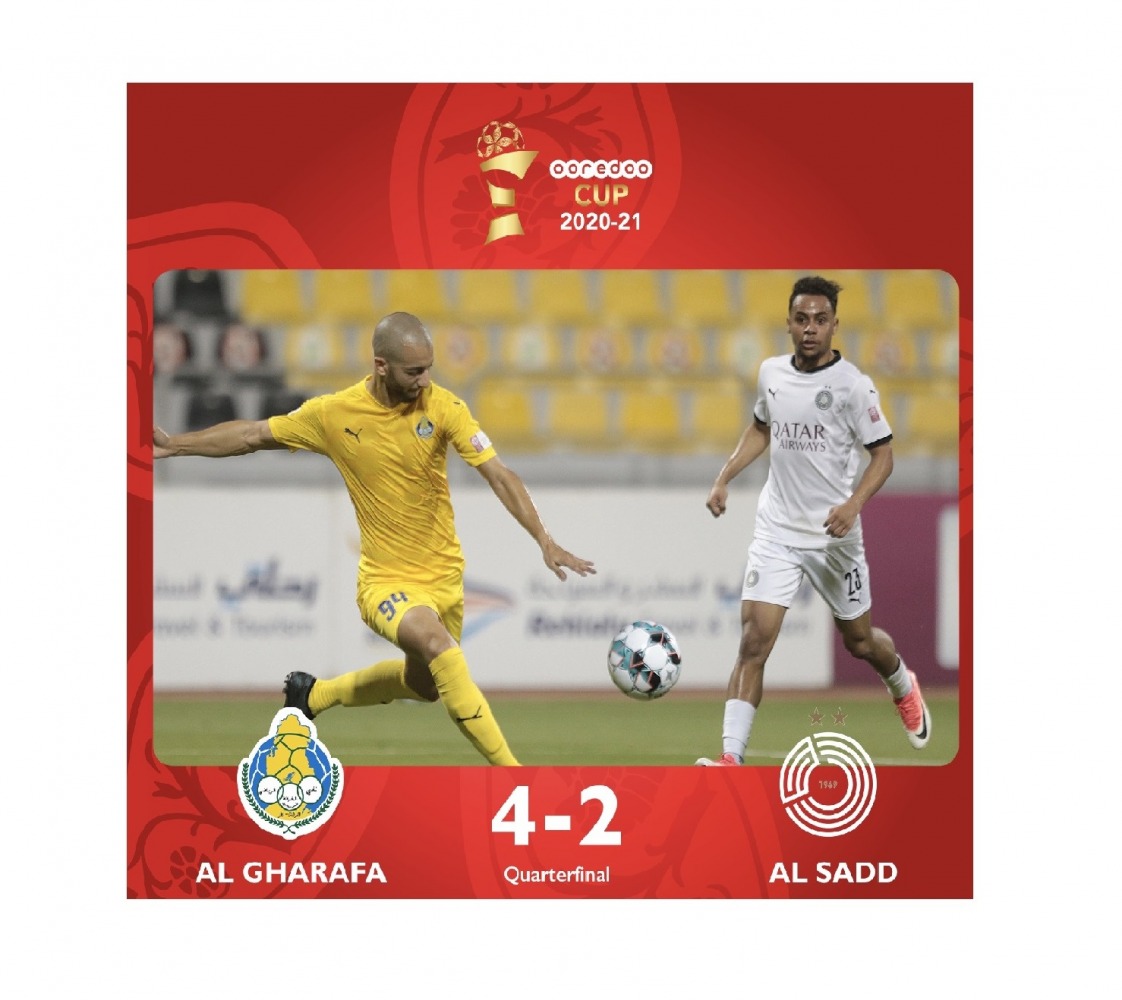 Doha, 16 November 2020 - Two late goals powered Al Gharafa to a 4-2 win over Al Sadd in the third quarterfinal of the 2020-21 season Ooredoo Cup at the Qatar SC Stadium on Monday.

In the seventh minute, Al Gharafa’s Hanni received a neat low cross from skipper Abdulghani Muneer just a few metres away from the Al Sadd box. Despite being chased by two defenders, Hanni hoodwinked goalkeeper Jehad Mohammed with a neat left-footed tap that narrowly missed the far goalpost with nobody on the goal-line.

Two minutes later, Muneer produced a header on a long cross from the flank, but his shot was pouched by the goalkeeper.

In the 19th minute, Talal Abdulla of Al Sadd was shown the red card for a front-on tackle on Abdollah Ali. Referee Moatasem Al Mazyed reviewed the foul on VAR and then decided to send Abdulla off the field as Al Sadd players remonstrated on the decision.

Al Gharafa grabbed the lead when Hanni, after a long cross from the centerline, ran for a few metres before calmly slotting the ball between the goalkeeper’s legs.

Three minutes into the second half, Al Gharafa jumped to a 2-0 lead. Yousef Muftah chipped in with a cross from the right flank and Koo easily tapped the ball into the net.

Before long, Tabata headed home a long cross from Saoud Ibrahim as Al Sadd finally managed to get a goal.

Al Sadd equalised through Cazorla who scored off a penalty. Muftah brought down Tabata inside the box and the referee pointed to the spot kick.

Al Gharafa again surged ahead when Hanni scored off a penalty. Hossam Kamal brought down Othman in the Al Sadd box and the referee pointed to the spot kick that was easily converted by Hanni.

Othman then drilled one from close range for Al Gharafa’s fourth goal.

Al Gharafa entered the knockout quarterfinal as the top side from Group B with 13 points. They had the most number of victories (four) in the tournament’s group phase.

Al Gharafa defeated Umm Salal and Al Rayyan by an identical 2-0 margin, and Al Kharaitiyat 3-1 and Al Ahli 3-0. The only time they dropped points was when they were held goalless by Al Arabi.