Our goal is to keep on winning, says Al Sadd coach Xavi 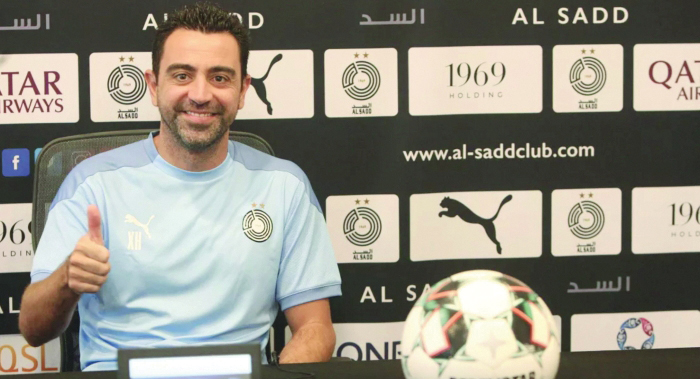 Doha, 27 November 2020 - Al Sadd Coach Xavi Hernandez has said his team would look to keep their winning run going when they take on Umm Salal in the QNB Stars League on Friday.
Al Sadd are the table toppers with 16 points. They are also the only unbeaten team so far in the tournament. The Wolves have scored the most number of goals (24) as well.
But Xavi was wary of bottom-placed Umm Salal’s counter-attacking game and called their Moroccan coach Ben Askar ‘a fighter’.
“Umm Salal are a determined side and their coach is a fighter. I think they will find solutions through counter-attacks. We are the favourites to win. But as usual, we have to show our true level on the field to collect the three points,” the Sadd coach said yesterday.
“We have a great group of players and we are going through a good period, but we have to keep going like this and keep winning. I try to rotate the players because everyone deserves to play and we have a large group and every player is important to us. The levels of players are close, and we have outstanding youngsters and professionals,” the Spaniard added.
Sadd goalkeeper Saad al-Dosari returned to training with the first team, after recovering from a head injury he had suffered during the Qatar national team’s friendly against Ghana in October. Al-Dosari.
“The return of Saad Al Dossari to training after his injury makes me very happy. He completed his recovery process well,” said Xavi.
“We need everybody: we need Saad, Meshaal Barsham, Jehad Mohamed, Yousuf al-Baloushi; we need all the goalkeepers. It depends on the performance in training. Now, it’s difficult for me to choose the lineup, but everybody is training really well and this is the way to compete,” the midfield great said.
On the other hand, Umm Salal are last in the table with four points. They have only a victory (1-0 against Qatar SC) and goalless draw against Al Khor to show for their efforts.
Askar said the pressure is on Sadd to win the match, as they are heavy favourites “We were disappointed after our loss to Al Ahli in the last round, but we will continue to work to achieve our goal this season, which is difficult though. We go into the match without pressure because the pressure is on Al Sadd. We are thinking about the points and we will see how things will go,” he said.
“We are facing the leaders and the best team in Asia whose coach is doing a great job. But as I kept saying, we focus on ourselves and I am happy that we have a good group of players. For me, this is important because everyone is waiting for good results and I think this is not difficult,” Umm Salal coach added.