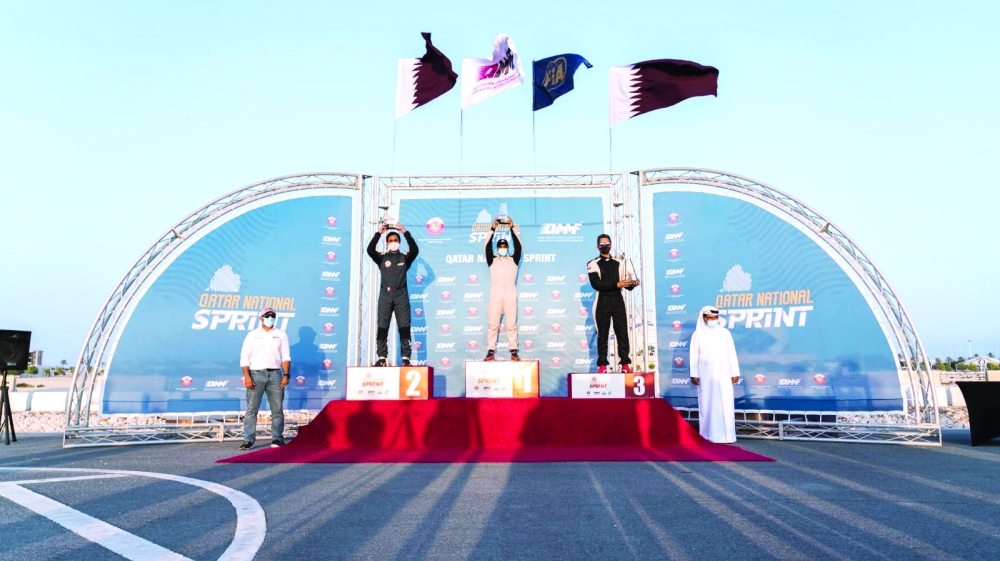 Doha, 7 December 2020 - The 2020 Qatar National Sprint Championship organised by Qatar Motor & Motorcycle Federation (QMMF) concluded with the fifth and final round held at Lusail.
The championship which had begun in January was extended over the year following the forced coronavirus pandemic break. Yet, the enthusiasm among participants remained high with both the local and expat drivers excelling till the very end.
In the final round, 44 participants in six different categories of Open and Production Cars made attempts before their best results were taken into account in crowning the season’s champions.
Abdulaziz al-Jabri emerged best in the O1 category, Mohamed al-Khayyarin in O2, and Abdullah al-Khelaifi in O3. Henry Kahy topped the overall P1 category, followed by al-Jaber (P2), and Francesco Fornaciari (P3).
In the Open 1 class, Abdulaziz al-Jaber won the title for a second year in a row collecting 104 points - a difference of 11 points over his closest competitor Abdullah al-Khelaifi.
Al-Khelaifi recorded the fastest lap of 52.358secs during his second attempt, especially since al-Jabri maintained his pace and finished second in 54.472secs in his third attempt, while Iyad Al-Aker came third with a time of 54.655secs in his first attempt.
In the O2 category, competition was exciting until the final round. Mohamed al-Khayarin snatched the title managing to win the fifth round with a time of 52.982secs, 0.308secs ahead of his closest rival Mohamed al-Basti.
In the O3 category, al-Khelaifi compensated for his failure in the O1 category to claim the overall title finishing on top in the final round with a time of 52.333secs, a difference of 0.515secs from Abdullah al-Abbasi, second-placed. Yousef al-Jabri finished third in 54.001secs. In the P1 category, Lebanon’s Henry Kahy emerged as the overall winner with a tally of 104 points. His compatriot Mansour Shibli was second with 70 points, and Qatari Saad Fahd, who won the fifth round, finished overall third (69pts).
Amro al-Hamad, Executive Director of QMMF, expressed his happiness with the great participation of 44 competitors despite the exceptional coronavirus pandemic (COVID-19) circumstances. “We did not expect this great participation, especially since some of the contestants were unable to participate from outside Qatar due to the current coronavirus situation, especially since some countries cancelled their sports activities, but we worked during the period. We thank the FIA for their efforts throughout the past period and all contestants for adhering to the precautionary measures and Ministry of Public Health protocols,” said al-Hamad.
“The competition was very strong until the end, especially in some categories where the results were decided by a point’s difference. It also reflects the strong competition throughout an entire season. In the final round we amended the speed and changed the course which made the competition tougher,” he added.
Al-Hamad also revealed that a new version of the championship will be launched in the new year in January, and therefore the competition will return quickly and will be held in the same categories.
The QMMF will be meeting the contestants soon to find out if some ruled could be changed in order to attract more competitors.