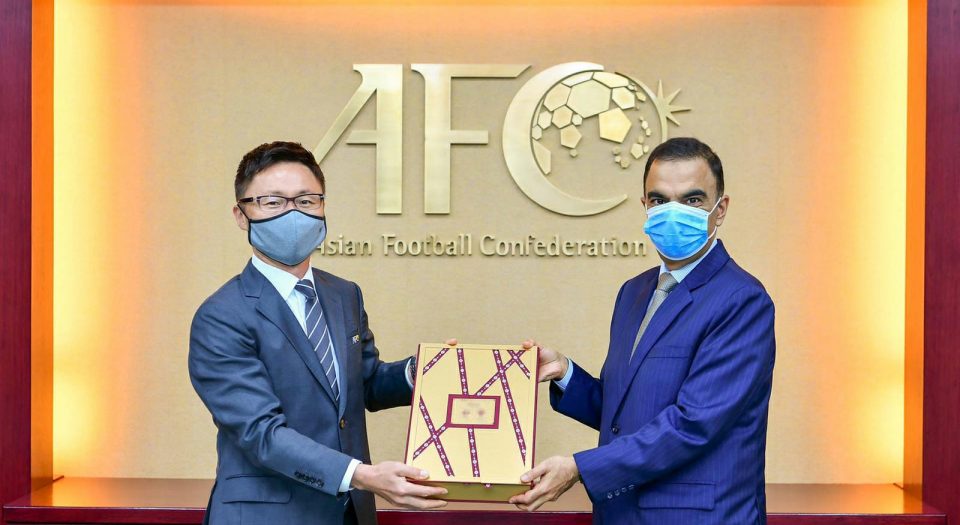 Kuala Lumpur, 14 December 2020 - The Qatar Football Association (QFA) has handed over the fourth and final part of the AFC Asian Cup 2027 bid file. The 20 original bid book documents were handed over by HE Ambassador of the State of Qatar to the Kingdom of Malaysia Fahd bin Mohammed Kafoud.

QFA remains confident that – in line with its endeavour to organize the tournament according to the highest international standards – the AFC Asian Cup 2027 will become one of the many top sports events the country has staged, should hosting rights be awarded to the QFA. Major AFC tournaments already held in Qatar include the AFC Asian Cup 1988 and 2011 editions, as well as the AFC Champions League matches of the West Zone and the East Zone in 2020.

Sheikh Hamad bin Khalifa bin Ahmed Al Thani, President of Qatar Football Association, said: “Qatar will be ready to host the nineteenth edition of the Asian Cup for national teams, taking advantage of the modern sports facilities that will stage the FIFA World Cup Qatar 2022™ matches. Qatar is keen to leave a lasting legacy for the Asian football family by delivering a memorable AFC Asian Cup in 2027. Creating a sports legacy that benefits future generations is part of the 2030 Qatar National Vision.”

He added: “Qatar is currently working on preparations for the FIFA World Cup Qatar 2022™ by developing state-of-the-art infrastructure, including a major-road network to connect the entire country and a significant expansion in the number of hotel rooms. The Metro service is already in use, helping hundreds of thousands of professionals commute between their home and workplace. The final part of our bid file shows that Qatar is determined to stage the AFC Asian Cup 2027 in a manner that reflects the high standards we uphold when staging top international sports events on our soil. The AFC Asian Cup 2027 will be no exception.”

“We have worked tirelessly to prepare a comprehensive bid file that meets all hosting criteria through coordination with all authorities in the country. We extend our sincere thanks and appreciation to the authorities for the efforts they have made in preparing this bid file. We look forward to working with them as we look to secure the rights to host the AFC Asian Cup 2027, God willing.”

It is worth noting that the QFA handed over the first part of its bid file on 26 August, underlining its desire to host Asia’s biggest national team event, followed by the second part covering legal requirements on 29 October, and the third part showcasing the government guarantee requirements on 26 November.