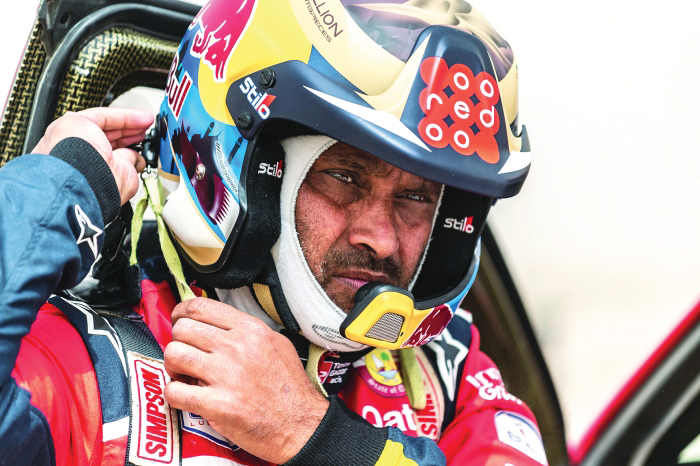 Hail/KSA, 15 December 2020 - Both Bernhard Ten Brinke and Vladimir Vasilyev will have to be as competitive as possible to fend off a late challenge for the FIA World Cup for Cross-Country Bajas title by Qatar’s Nasser Saleh al-Attiyah, as action in the Hail Baja 2 gets underway in the deserts around Baqqa today.
The two days between the Baja 1 and 2, fourth and fifth round of the FIA World Cup, marked a perfect opportunity for some teams to carry out testing, and for others to change settings and make revisions to the cars before the resumption of competitive action.
Ten Brinke’s engineers have made some radical changes to his Toyota’s suspension.
As co-driver Tom Colsoul pointed out: “We needed to do something. The car just wasn’t feeling right. We watched some video footage of the first Baja and we could see it didn’t seem to be handling properly. So the team made some big changes to the suspension.”
Meanwhile, the Red Bull crews of al-Attiyah and Matthieu Baumel, Carlos Sainz and Lucas Cruz,and  Stéphane Peterhansel and Edouard Boulanger, spent an enjoyable few hours on Sunday afternoon working on a Red Bull promotion with esteemed motion picture helicopter pilot Fred North.
Twice former DTM champion and triple Race of Champions winner Mattias Ekström will get his first taste of cross-country competition at Hail Baja 2 in one of two new X-raid-developed Yamaha YXZ 1000R Rally prototypes entered in the T3 class.
The Swede said: “This is my first time in Saudi Arabia and my first time to do a race in a side-by-side (T3). I’m really excited to be with X-raid to drive the Yamaha. This is a chance here in Hail for me to prepare for the big challenge, the Dakar. This is the first time the prototype Yamaha will do a race, so it will be a first for both of us in the desert.”
X-raid team director Sven Quandt added: “This is a new project for us. It is aimed at beginners and gentleman drivers who love to go to the Dakar as well in the future. We are running the cars here for the first time. No testing, nothing. This, for us, is a pure test and we see what we have to cure until Dakar.  We hope not too much. This is an affordable side-by-side. Hopefully if everything works out then, maybe, next summer, you can buy a machine like this.”
Local driver Al-Mashna al-Shammeri triumphed in the first of the National rallies and the Nissan Pick-Up driver will be aiming to fend off a large Saudi challenge, while Riyadh al-Shammeri and Abdulmajeed al-Khulaifi are expected to resume their duel in the quad category.
The opening selective section of 311.57km takes place to the north-east of Hail and starts and finishes near the town of Baqqa after looping through the An Nafud desert.
The first FIA vehicle is due on stage from 09.07hrs, but the motorcycles and quads will leave Hail for the stage start around daybreak with Frenchman Adrien van Beveren looking for a second successive win on two wheels with his factory Yamaha WRF 450. There will be a liaison of 99.10km to the stage start and a return trip of 97.08km to the service park.